Here is my review:

Cat Power’s Sun tour landed in New York City after a flurry of bad concert reviews and rumor-mongering about Chan Marshall’s mental and physical health. The concern for her well-being was justifiable, since who could help but wonder about her well-publicized sobriety when in recent months she had invited journalists to join her on a seemingly nonstop bender, and even added fuel to the fire by tweeting photos from the inside of ambulances. The postponement of Cat Power’s Philadelphia concert on the same day as her New York appearance seemed yet another bad omen for the evening’s proceedings. But the show got off to a promising start when Chan appeared onstage early to introduce her friend Seth Tobocman, who gave a short reading before Chan and her band took the Hammerstein Ballroom stage ahead of their scheduled start time.

The Sun tour aims to translate the heavily mixed and layered sound of Cat Power’s well-received new album on stage with the added visual dimension of a high-tech light show, which is all very ambitious and something that Cat Power live shows have never done before. Most of the Sun album would seem to fit in a category with older songs like “Shaking Paper” and “Free” that exist in their studio versions but are very difficult to recreate in a live setting. While the dazzling light effects at the Hammerstein Ballroom made a strong impression from the start, particularly the bright burning orb projected as a backdrop to “Sun,” some of the first few songs sounded less than fully realized in their live versions. “Cherokee,” “Sun,” “3,6,9” and “King Rides By” were not well served by Chan’s low-pitched vocals that drowned in a blast of prerecorded music and vocals that sounded identical to the studio versions. “Human Being,” featuring a giant flickering monkey head, and “Manhattan” with its vintage cityscapes seemed like glimmers of hope, since the arrangements were actually different from the album versions, and they sounded pretty great.

Perhaps Chan was saving her voice during the set-opening songs, because she took the show in a different direction and stunned the room with her strong and moving vocals on “Bully” and “Angelitos Negros.” Both of these were sparsely accompanied in the style of her previous band, Dirty Delta Blues, and “The Greatest” and “I Don’t Blame You” were likewise performed in an almost identical style as on recent tours, with soulful vocals showcasing the best of Chan’s gifts - the audience was extremely appreciative of these beautiful renditions. The Sun songs that came later in the set were generally more successful, with “Peace and Love” being a highlight and extremely powerful with its rainbow-colored lights. While “Nothin’ But Time” and “Ruin” had a triumphant feeling, there were a couple of missteps, such as Chan’s obviously fake guitar playing during “Silent Machine,” and “Back in the Days,” which Chan cut short by saying, “Let’s just cut off this f***in’ song, it’s not supposed to sound like this. I’m sorry.”

Apparently Chan was happy with the way most of her songs sounded this evening, because she seemed in high spirits as she traipsed around the stage throwing several large bouquets of flowers into the adoring crowd during the slinky set-closer, “Ramblin’ (Wo)man.” Complete with her spunky blonde mohawk, this show was an uneven but ultimately transcendent staging of a strikingly experimental phase in Chan Marshall’s music which continues to surprise and inspire.

Nicolaoua wrote:Let's see if other people have troubles with that.
My computer only have 1 GO of memory and it's struggling a bit...

Ah, I did not realize that. No big deal. I'll wait for the next page to post more.

tumbleweed wrote:Here is my review:

tumbleweed wrote:Most of the Sun album would seem to fit in a category with older songs like “Shaking Paper” and “Free” that exist in their studio versions but are very difficult to recreate in a live setting.

I am still wishing that "Free" will make an appearence live, if not this tour than some time in the future. It's not too dissimilar from "Manhattan", being that its mainly just a low-key drum beat with a looping guitar part ("Manhattan" having a looping piano part), which Adeline could probably play in her sleep. I can see why Chan never played it solo though, because it is hard to keep up that repeating guitar riff and sing it at the same time.
_________________
"Ready to get depressed?" - Chan, 11/16/13 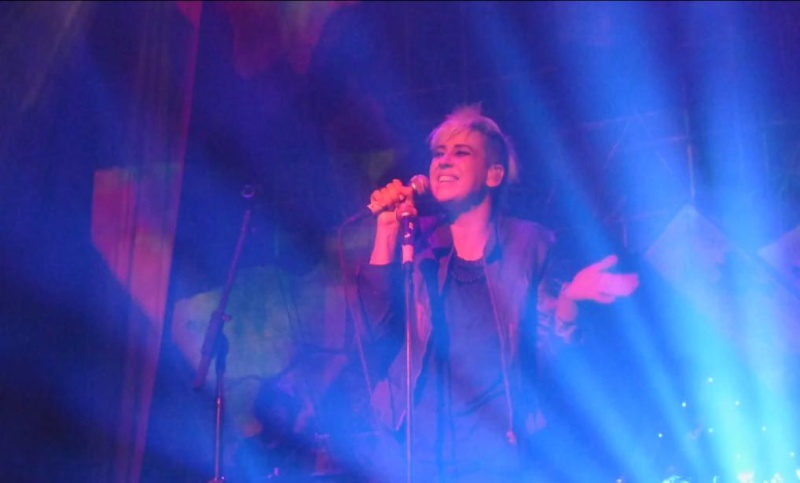 Always On My Own: 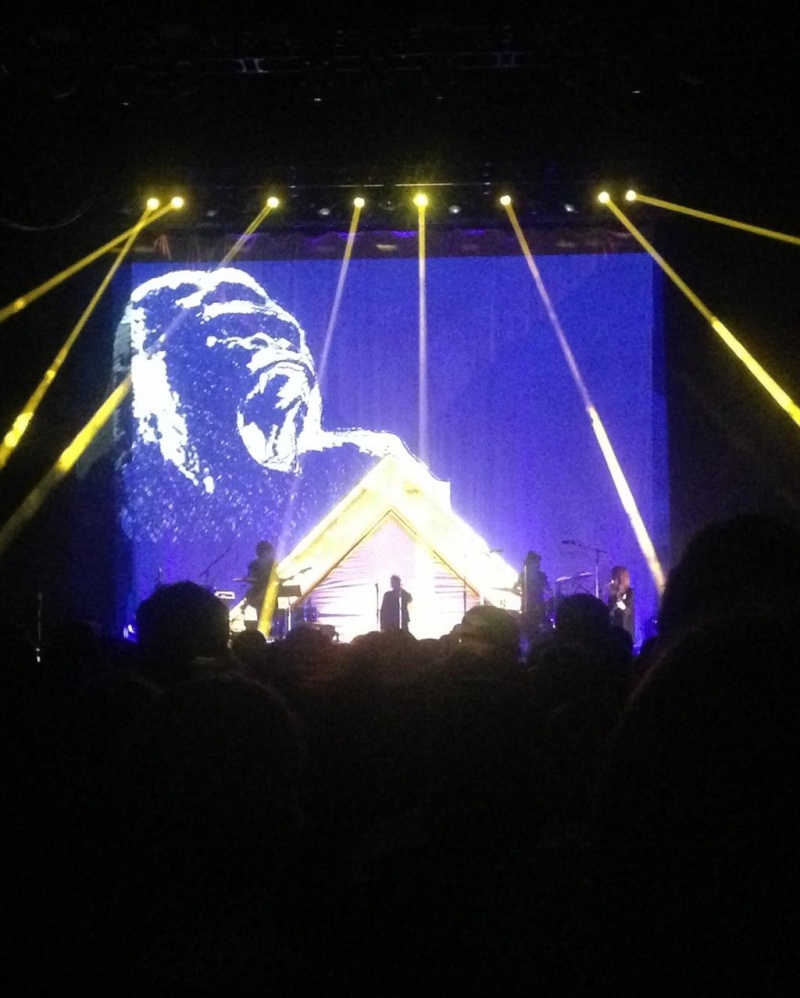 You might recognize the writer of this review, Ben Ratliff. He also wrote the review for the infamous 1999 Bowery Ballroom concert.

In the slightly more than 20 years that Chan Marshall has been performing as Cat Power, putting her ruminative, wandering, mostly bridgeless songs in front of various kinds of bands, there have been good and bad nights.

She could be good early on, but was more often good in public after 2006, after treatment for depression and reckoning with alcohol abuse. That was when she finally established protocols for performance, assumed control, finished songs to the end and let you hear the breadth of her voice. Now, at 40, that voice has a fair range of many things: pitch and color and emotion and diction, as well as a practiced will to revise anything she sings, her own songs and others’.

Surprisingly her show at Hammerstein Ballroom on Tuesday, preceded by a recording of Bob Dylan’s “Shelter From the Storm” and a short, Occupy-theme poetic speech by the writer and political activist Seth Tobocman, was, at first, pretty bad. Not an emergency — her Instagram feed has shown us photos from inside of a few hospital rooms during the last month — and not as bad as recent reviews had implied. But, for about 30 minutes, a lost opportunity.

Ms. Marshall made the new Cat Power record, “Sun,” entirely by herself. And the first few songs, including “Cherokee,” “3,6,9,” and “Human Being,” seemed poorly adapted to her new touring band. She was singing through two microphones, one with a slight delay, to replicate her own massed harmonies on “Sun”; the other band members sang backup as well. But the sound became dense and lumpy, with no shape or clarity. Her voice got buried, and by her old song “King Rides By,” she’d lost control of pitch, clashing against the vocal harmonies of the guitarist Adeline Jasso. She looked sharp, in a new blonde Mohawk and high-heel boots. But her body language felt halfhearted. She was dithering. Uh oh.

And then, just as surprisingly, she opened up and radically redefined her course. From there on the concert was good, occasionally very good.

She sang “Bully,” a slow and moving song she hasn’t recorded yet, with only voice and guitar, stretching out consoling words to and about someone in trouble. She broke through. The crowd rewarded her, and she started moving toward it, tracing wider paths around the stage in small steps. She sang her song “The Greatest,” slowly, resizing it and making it more abstract; she refined her use of the second microphone, and began to ease into something like a stage show. (During “Peace and Love” the word “Occupower” flashed on the back screen; she opened an umbrella reading “99%.”) She ran through most of “Sun,” against a trebly, adaptable quartet that droned and stomped and sometimes reconfigured into new systems, with double drums and triple guitars.

The old self-saboteur only made a partial appearance. Needlessly she cut short “Back in the Days.” And at the end she awkwardly distributed flowers to the audience, spending too much time giving them out one by one, then hurling them in bunches. Sometimes she seemed as if she’d had very little previous experience onstage, and the degree to which that could seem a strength made a decent measure of her skill. 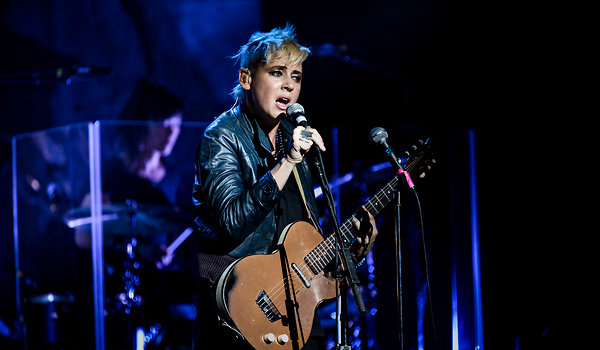 Angelitos Negros
You can hear the auto-tune very clearly on this one. 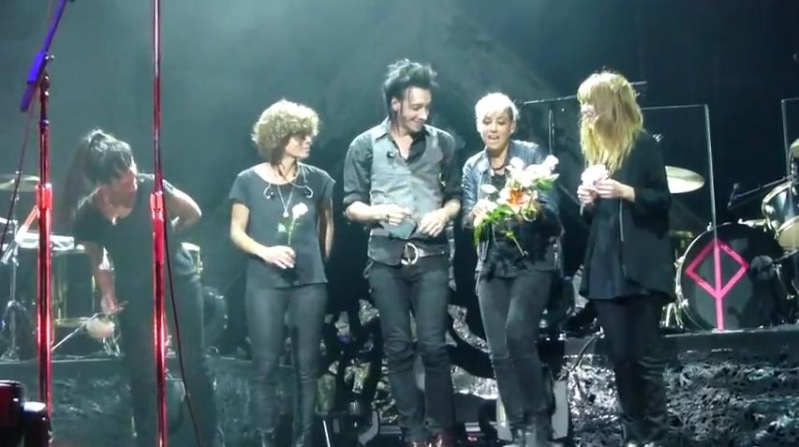 Interesting (though not very well taken) pictures taken from backstage, that gives you an idea of what Chan was facing that night: http://purple.fr/diary/entry/cat-power-hammerstein-ballroom-new-york
_________________
Bitchin', complainin' !

Selected clips from Video recorded by the Manhattan Center:

Another video for Bully. The sound is very good: 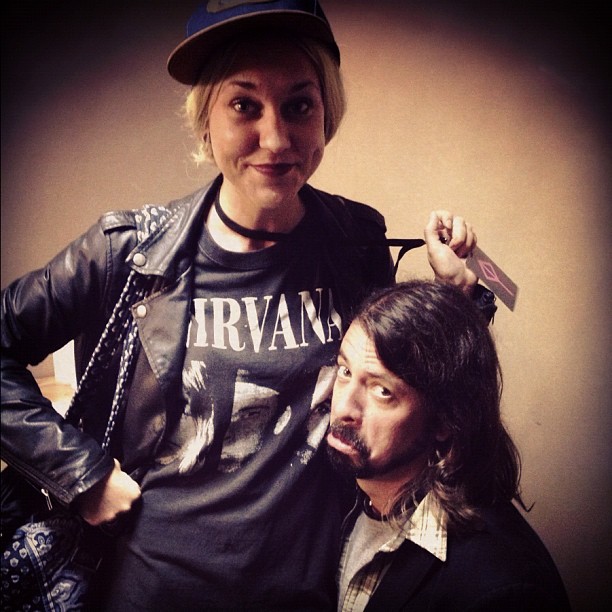