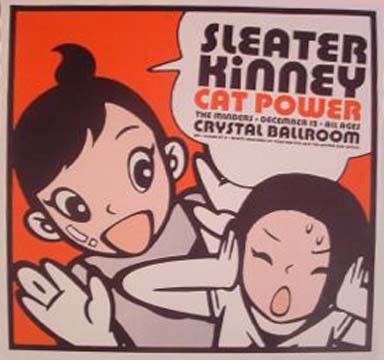 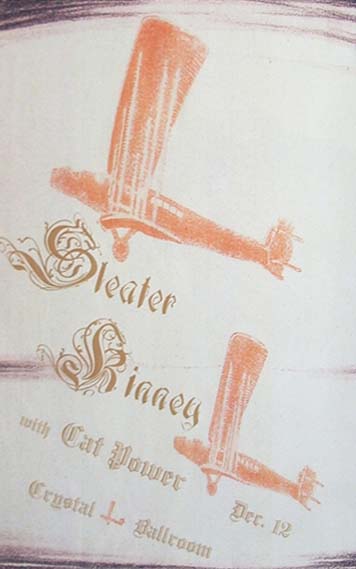 This is for whoever keeps coming back to this topic.

Waiting in the clusters of Converse-clad middle-schoolers camped in front of the stage at the Crystal Ballroom Friday night, I felt old. That's a rare feeling for a 17-year-old, but it was there, amid the swarming clumps of radioactive children who had stood in a line stretching around the block to squeeze into the sold-out venue for the Sleater-Kinney show. Waiting through the Minders and Cat Power, the fans were obviously anxious. The Minders came on feeling poppy and gentle, while Chan Marshall's nervously hushed vocals gave strength to the raw, anguished ballads of Cat Power, leaving the few paying attention swaying.

But 45 minutes of standing and swaying was a bit much for 17-year-old legs. Luckily, S-K was on deck and the dancing would begin. Almost immediately after taking the stage, the three Portland ladies erased age, replacing it with energy. Playing through a set that relied heavily on last year's One Beat (Kill Rock Stars), the trio fed off of the crowd's elation and gave it right back. After a few songs, we responded with an erupting mosh pit until guitarist Carrie Brownstein told us to continue dancing, minus the elbows. A few did fly during the lengthy set, but they were stopped by scattered adults. By the time the second encore ended, the buses had stopped running, leaving the city's children drenched, yet satisfied. (Adina Lepp)
_________________
"Ready to get depressed?" - Chan, 11/16/13

I only heard of them years ago, but never listened to them. I dont think they were ever that big. I only vaguely remember seeing one of their videos on MTV back in the day. I came across their setlist for this show and they played a song called "Not What You Want". But its not the Cat Power song, its one of their own.
_________________
"Ready to get depressed?" - Chan, 11/16/13