This was the 39th performance of the tour. It was appearently a great show with a large audience.

A great mix of her own music (mostly from her lovely new CD) and suprisingly a lot of covers. Loved hearing her kick-ass version of the White Stripes- Dead Leaves in the Dirty Ground, as well as The Stone's- Satasfaction and The Everly Brother's- Dream. I don't know the song titles of her own stuff- I'm a relatively new fan, I'll leave it to Elf Kicker to id properly. Overall the show was a great blend of solo piano or guitar emotional beauty alternating with rocking vibrent beats with her band.

There were a few technical problems and moments when things got a bit bogged down but overall it left me with the most beautiful glow and a warm feeling. I felt honoured to be a part of her allbeit crazy world for a night.

A number of comments from Matador Forum Members

- Based on what we thought was rock solid research (reading past reviews and information on the venue website), we showed up at 11:30 expecting Chan to be getting on stage a few moments later. Unfortunately, our estimates were a little off, and we showed up halfway into the show! Apparently we missed some heavy drinking on Chan's part and a few good songs from "You Are Free"

- Sound quality was very good, even on the second balcony, and Chan's voice was wonderfully clean

- Surprisingly few temper tantrums; I think this was due to the fact that she was visibly soused.

- At one point in the show she was complaining about some "cop car radio" noises--this was coming from the third balcony, where we were. This Mick Jones doppelganger who was working the water stand had his CB/walkie talkie turned up to the max volume and was eagerly awaiting notification that floor #1 was low on water so he could do something other than pick his ass for the rest of the night. The pacman sounds coming from that stupid walkie talkie were quite a distraction during the quieter songs in the show; I could have killed that fu*ker!!!

- Good cover of "Dead Leaves and the Dirty Ground" by the White Stripes; she also covered "Knockin' on Heaven's Door" although you could barely tell what it was

- Apparently the opening act was an affront to live music; luckily we missed him

I was there for the whole show and I was up front, sitting on the stage! It was a real intimate feeling, because there were numerous people sitting cross-legged on the edge of the stage. if you've been to the opera house, you know what I mean. When she did her solo stuff, I found that most of the audience was surprisingly quiet. The music wasn't very loud either, so sometimes you could hear the bar tender clinking some glasses or something like that. The guitarist was entertaining, he was kinda jokey and friendly.

Many of the songs she performed I didn't recognize. I own all of the Cat Power records except Myra Lee, and I'd say there was a good half or third of her songs that I didn't immediately recognize. I don't think anything from Moonpix was played, but she did do Rockets, which is my favourite one. There were a few songs that completely rocked out, and the rest was mid-tempo bluesy music with a full band and her solo songs with just her and her guitar or piano. The white stripes cover was awesome, surprisingly close to the original. And she did her solo version of Satisfaction with the chorus! I didn't expect that.

Regarding the Toronto show... I thought the second guitar was too high, it took away from Chan's voice at some points. In general though, the show was great. The older material went a bit under-represented... It would have been nice to see her eyes instead of those big black glasses as well. A great night all in all.

I would have to agree with the person that said the guitar was up too loud. I was fortunate to be standing/sitting in the front row on the right side.. I thought it would be a great place to be...but all I could hear from the guitarist!!! Chan was really far away.. and even though I was in the front row... I found it hard to hear most of the stuff she was saying. I found the concert was alright.. I had never seen her live before. But I expected it to be more.. professional. It seems like all the members on stage were playing on their own... people would start and end songs whenever they wanted. Chan seemed very drunk and not very focused. Although I did love it when she was alone on stage and playing. There was alot of technical trouble and the venue is terrible as well. The sound sucks in the Opera House. Hopefully, when Chan comes back to Toronto, she will play a better venue, such as Massey Hall or the Phoenix. I think she is great and her shows could be a lot better. Also... it always amazes me when people that show up late for shows, end up in the front row! I waited in line outside, an hour before doors opened. I was sitting on the stage waiting for the show to start. Then halfway through the show, these two girls, who were like half way up to the stage.. rudely sat in front of me on the stage and blocked my view for the rest of the show.. I was really annoyed!

Well, I saw the show at the opera house, and I had mixed feelings about it. The songs and her voice carried the show a long way, but there were lots of technical problems, and a lot of "personal drama" on stage that should have been left out.

The band certainly relies on the devotion of its fans to let a lot of these things pass. What do I know though, maybe this kind of stuff is the "gimmick" that appeals to the fans? Is the band all sleeping with one another or is this staged to keep the fans interested? Is this part of the show?

BTW, what was going on in the front of the stage between Chan and .. I couldn't tell who.. Was she coming on to one of the ladies in audience? From the balcony, it was hard to see, everyone was straining to see something at one point, but I couldn't tell what.

Drama? What drama? All I saw was Chan asking the guitarist for a cigerette, some in-jokes exchanged between them, and the guitarist just having fun with the audience. It didn't feel like a gimmick to me, but just friends on stage having fun.

Agreed! I find that the show wasnt organized very well. I didnt know which songs they were playing half the time. It was nice to put a face to the name though... I had never seen Chan live before. It was great seeing her... or not seeing her.. Chan take off those sunglasses!! Its a dark room!!! Are you trying to be Bono??? Lol. I had never seen anyone so drunk out of her mind at a concert before though. She looked like she was going to fall off her chair at times. The second guitar was waaaay too loud!! It was all I could hear! I had read reviews before that said Chan's more acoustic shows are lacking.. but I would of much rather seen her play an acoustic show!

I found at the Toronto show, Chan seemed very friendly with the crowd. She was taking stuff the fans were throwing at her, one person threw a tape at her that they made, and pussy willows (what was the point of that??). She was waving at the audience. She seemed to have enjoyed herself. 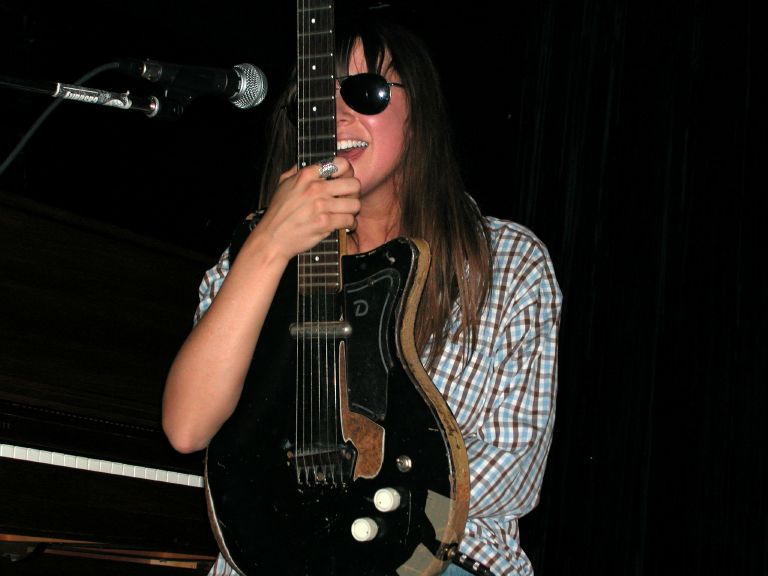 If Forrest Gump were to describe a Cat Power show, he'd probably use his box-of-chocolates analogy. Though, by glancing at the setlist on the soundboard, it appeared that we were only going to get about ten chocolates. Mainly selections from February's stellar release, "You Are Free."

Chan Marshall and her band, guitarist Coleman Lewis, drummer, Will Fratesi and violinist/bassist/keyboardist Margaret White took the stage around 10:45, after opener, the one-man pianist/guitarist/foot-tambourinist, Entrance finally decided that he had played his last song (after having promised this two songs beforehand). Beginning with "Free," Chan and the band smoothly and pretty much simultaneously went through the motions of the first few songs with little-to-no distractions or stage banter. Things picked up towards the end of the official setlist with a gorgeous rendition of "Good Woman."

Chan followed the 10-song full-band set with a solo piano set which included a few of her infamous false-starts. Chan had some very reasonable complaints about the low monitors, which caused her to abandon, then restart "Names." Unfortunately the audience could barely hear her over the noisy environment. One lower-level barmaid laughed and conversed loudly with other Opera House employees and once even slammed the refrigerator shut. Either Chan was oblivious to this, or she didn't want to make a fuss.

After closing the solo set with her crowd-favourite cover of the Rolling Stones' "Satisfaction," the band came out once more. This time, the band seemed to have picked up a groove and some people at the back of the lower level were even dancing. The closing set included covers such as the White Stripes' "Dead Leaves on Dirty Ground," and Tina Turner's "Private Dancer"
(with the charismatic Coleman on vocals), peppered with false-starts to a few Cat Power originals, invitations to the strip club across the street after the show, reluctant audience sing/clap-alongs and Coleman insisting on giving a beer to a "smiling girl" in the audience. After nearly two hours, the Cat Power crew saved the best chocolate for last with a cover of Bob Dylan's "Knockin on Heaven's Door."