This was the 17th performance of the tour. The reviews say the band played, then a solo section and then some more songs with the band. Looks like it was a fun show. 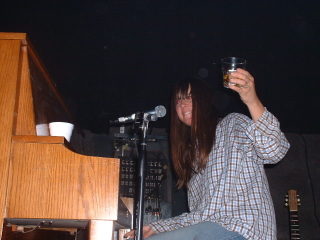 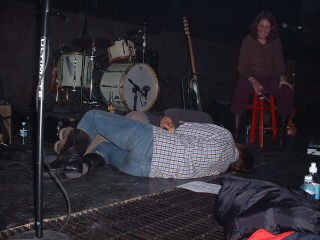 Picture from flickr -
http://www.flickr.com/photos/deatonstreet/6837487146/
Her comment: Me and the musician Chan Marshall, aka Cat Power, taken after her performance at Club Laga in Pittsburgh. It was one of her famously drunken and incoherent performances, which had a crowd of 400 people quickly dwindle to about 50, but I was determined to get my photo taken with her. 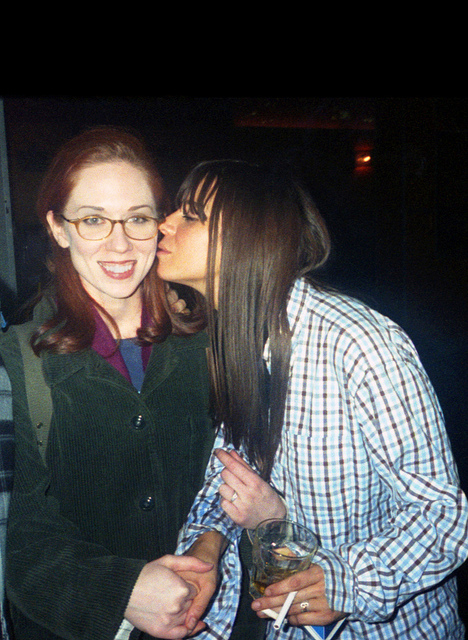 Although it’s assuredly not an admirable quality of the human condition, there is considerable evidence that since the beginning of time many of us have taken a perverse pleasure in the thrill of witnessing someone go through something embarrassing or painful. From public executions and boxing matches to horror movies and America’s Funniest Home Videos, the allure of seeing an individual who has the unique distinction of not being you face a potentially awkward or stressful dilemma, and the dramatic tension inherent in the process, holds a puzzling curiosity. And even though the 400 or so that turned up at Pittsburgh’s Club Laga would have been entirely justified in attending a Cat Power show purely on the merit of Chan Marshall’s solemnly hypnotic balladry and aura of inhibited aloofness, her reputation for unpredictable and uneven performances probably led more than a few up the four flights to the venue.

For years now Cat Power concerts have become notable more for their puzzling (and apparently unplanned) theatrical qualities than for the somber lullabies Marshall constructs with her fragile breathy croon and frank poetics. Now legendary are tales of her backing band walking off the stage in disgust as she continuously restarts the same song at the slightest imperfection, while frustrating sound men to the point of cutting the power to the stage after endless requests for minor adjustments in volume. No doubt, the magic of her enigmatic gifts is a legitimate draw, but some in the crowd were clearly waiting for a meltdown on stage.

Taking her seat on a piano bench situated well to the left of center stage while the members of her three-piece band assumed their positions around her, Marshall cradled a weathered electric guitar and fumbled over a few chords, as guitarist Coleman Lewis warmed up the crowd with a few lines of “Looking for Love” in a faux-Southern accent. Any attempts at humor, however, were not reflected in Marshall or her singularly introverted demeanor, and the sense of dramatic tension never quite lifted despite various attempts at levity from her bandmates during the set. Her hair hiding her face from the audience she rarely acknowledged, she eased into a murky rendition of “Free,” with weepy violin and cavernous thumping creating a thick atmosphere akin to that found on early Velvet Underground tracks.

Drawing from different points in her recorded catalogue, the entirely reinvented “Don’t Blame You,” here fitted with a darkly swaggering blues groove in place of the solitary piano strikes that dominate the version on her much-lauded You Are Free, displayed Marshall’s ingenuity in not simply recreating her previous recordings note for note. With one leg slowly rising up and down with the hypnotic rhythms, Marshall annunciated the words as if each was being excised from within her, giving the impression that she had sung herself into another reality -- one where a few hundred people weren’t hanging on her every note. Ultimately, that escapism seemed to become the dominant undercurrent of the performance, as Marshall hid under layers of reverb and hypnotic one-chord arrangements, well within the solitary confines of her singularly possessed songwriting. The resulting sound, though a bit dense and muddled, with her vocals indecipherably low in the mix, showcased a surprisingly band-centric ethic that was impressively elastic in creating a suitable backdrop for her forebodingly fractured lullabies. From the early returns, any onstage oddity seemed unlikely.

Turning to her drummer, Will Fratesi, and inviting him over for a hug, Marshall gave the first signs that the show was about to enter another phase. Repeating the process with violinist/bassist/keyboardist Margaret White, Marshall eventually collapsed to the floor with Coleman, playfully chatting with him for an awkwardly long moment while the other two departed from the stage. Finally turning toward the humble upright piano that had rested with the stored energy imbued in it from having not yet been played, Marshall sat and seemed to nervously contemplate what to play. “Don’t bet your bottom dollar right now,” she said, seemingly in an attempt to lower the crowd’s collective anticipation. “I’m just gonna start going slow,” she explained after lighting a cigarette and lifting a glass to the crowd. Fidgeting nervously with the mic stand she looked like a piano student at her first recital, disoriented as she struggled to find her place.

The security blanket of her band now gone, the Chan Marshall of lore seemed to be forming right before our eyes as she’d play a few lines of song only to stop and make a request for the piano to be louder or for less vocals in her monitor. After the third re-start of the achingly sincere “Names,” the crowd grew restless, talking loudly and growing perilously close to entertaining themselves. The trend continued and Marshall the uncomfortable piano balladeer jumped somewhat aimlessly from song to song, crooning like Billie Holiday on some, abandoning others, but never pausing for even a second between them before she began the next. Entertaining for its oddness and vaguely charming for her apparent insecurity, the performance had the unique distinction of simultaneously trying the audience’s collective patience while hardening their resolve to see what might happen next.

“I’m gonna go ahead and turn on the smoke machine,” she said emotionlessly before reclaiming her guitar out of a thick fog and awkwardly launching into a rendition of the White Stripes’ “Dead Leaves and the Dirty Ground.” Focusing on the repetition of a few verses while changing some of the lyrics and melody, Marshall discovered a new intensity in the song (even though she botched the chorus), bordering on downright transcendent when the band emerged from the wings to fill out the sonic background. The band having returned, Marshall now seemed confused and unsure (and generally unconcerned) of where to lead next, haphazardly running through a canon of rock classics by singing a few bars of “Sympathy for the Devil,” “Knocking on Heaven’s Door” and even “Freebird” as the set dissolved into unheard stage conversation and directionless jamming. Interesting for those who wanted to know what it was like to a see a band play off the cuff, but for everyone else the performance frustratingly took on the tone of a live rehearsal, leaving only around 50 true-believers crowded around the stage as the band sputtered on past the two and a half hour mark.

In the end, a Cat Power concert is an occasion, like having your heart broken or giving birth, that isn’t necessarily pleasant or comprehensible while you’re experiencing it, but that needs to be endured because the participant emerges from it having witnessed a truly unique event. And if much of the merit of art is found in how successful a particular dynamic is in causing that participant to experience that drama as intimately as possible, few could hope for a more rewarding performance.