This was the fourth date of the five date tour of the south.

The 9/20/04 show in New Orleans was one of the most unique experiences of my life. I want to tell you about it. I was debating whether to make the hour-and-a-half drive alone, but I just knew when I saw a listing that Cat Power would be playing at The Parish in the House of Blues, I know there was no way I could let the opportunity pass me by, and I'm so glad I went.

The first glimpse I got of Chan was when she came into the audience to watch the opening act's last two numbers. She stood in front of me, and everyone immediately got embarassed and tried not to act like they were seeing an angel or a ghost roaming among men. No one who didn't know her personally already spoke to her. This is key to my impression of her and the show she put on.

She came on within 15 minutes of the close of the opening act. By the way, his last number singing "You can vote with a bullet" was priceless. The audience was entranced during the first 30 minutes, and she, as the reviewer in Dallas commented, instantly called for more reverb in the guitar and her voice after finishing most of the first song. After asking for more and more, she finally said that she was just going to wait until she got more reverb. She seemed frustrated, but not demanding - I don't want it to sound like that. Moreso disappointed, as if everything in the world is always cruel and meaningless, and she felt helpless. She said that she felt like she was going to barf, and seemed pretty uncomfortable in the dim limelight. A couple of more songs in, she also gave herself and the song a thumbs-down. The audience disagreed, fascinated with her, but she still hadn't felt satisfied with her performance so far. She whispered that a free t-shirt was available if someone wanted to light it on fire and throw it on-stage. She spoke quietly about her true misery at not being able to do what she really wanted to do well.

She referenced wanting to die several times, asking "How does that song go? I hate myself and I want to die," playing the intro to a Courtney Hole song "I'm Miss World, somebody kill me," later saying that she was waiting for the moment when someone would take a club to her head and beat it til she was dead, asking who was on anti-depressants and had ever tried to stop drinking. This all sounds extremely morbid, and it was, but never clawing or needy. It was exhilirating to hear someone who could so freely express herself without the stifling shame of saying the words that we in the audience all felt hearing them. I believe it's a beautiful gift to be able to express so freely without the fear that might stifle it.

In about the middle of the show, she asked the guy from the opening act (sorry I don't know his name) to play while she sang, and she walked out into the middle of the audience and sat down among the people to sing. Everyone craned their necks to get a look at her, and people even moved into spaces on the floor, relinquished by those who had long ago walked out, just to stare at her like she was a museum piece. I wished that I was sitting on the floor near her so that I could reach out to her so that I could embrace her -- hold her and be held by her. All that I could do was hang my head and listen as she sang/moaned out the lyrics while the speakers crackled every 5 or 10 seconds. She apologized so many times that I felt genuine agony for her. This one stupid guy sitting near her could only tenatively hold out a hand and pet her shoulder, as if this could comfort, as if anything could comfort. I have never seen an artist, or even a person, so unassumingly want to be part of the small community created in the moment around themselves, while simulataneously impossibly isolated and untouchable. What is it about our society that even those among us who consider ourselves deeply empathetic, wanting to reach out to others, have developed this chilly behavior for those who we truly want to connect with? Is it only ourselves that stop us? But, why?

As was written about the show in Dallas, at one point she seemed to lose all her momentum and any good cheer she had earlier, and started songs that she couldn't finish. Fans screamed out for a song they liked, one asshole yelled for a Nancy Sinatra song. Some just made fun of her, or went into the back of the club and talked loudly, interrupting her and the rest of us from the show. She tried to please by playing bits-and-pieces, but no longer had any stamina. She tuned her guitar and tried to find chords that she didn't know to cover someone else's songs. She went to the piano a couple of times, and smoked and drank out of a plastic cup more near the end of the show as if in desperation.

Overall, though, those that stuck around experienced an ultra-rare treat that I would pay triple for again.

I don't know. Does this sound like a very bad concert? To some, or maybe a lot, I guess it does. Maybe it's not what they want to be involved in. Maybe, like Chan seemed to believe at times and was disappointed in herself that she couldn't deliver, they think that a performance should follow a certain script where Moment A gives way to Moment B followed by Moment C and so on ending with Z. To me, the night I experienced was the cure to all of the other unbearable crap in this world that I wish would self-destruct. instead of Cat Power. Chan spoke of making a life change a few times during the night, and I was filled with a cold dread that she might stop making music or doing what she's been doing. I wish, for her sake alone, that she will find some peace and is able to release at least some of what hurts her. But I can't think of a more heavenly place than where I was last night, intimately involved in, feeling myself, that exhausting but exquisite pain.
_________________
"Ready to get depressed?" - Chan, 11/16/13 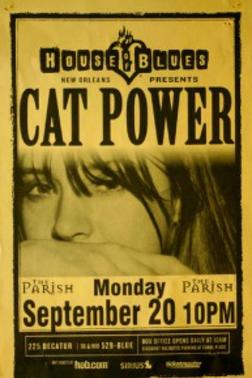