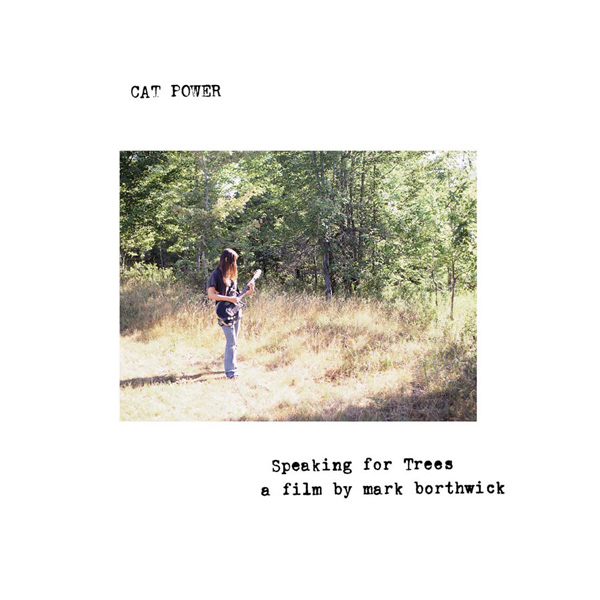 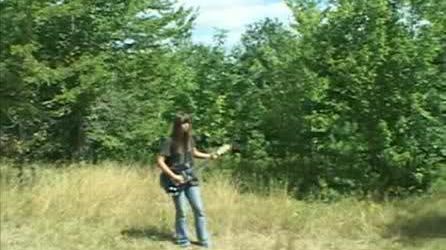 Information about Speaking For Trees

From Chan's interview with Scott Kara for the New Zealand Herald, 2/11/05:

When asked about her latest release, Speaking For Trees - a film of her performing in the countryside by experimental film-maker, and friend, Mark Borthwick - she is hesitant.

Chan: Is that what this interview is about? Because I don't know what I could say about [Speaking For Trees], (she laughs).

Chan: I didn't even know it would be released [in New Zealand]. An artist friend of mine wanted to do a project and film me, and I did it and then later the idea came out of releasing it and I agreed. But I never thought anybody ... I thought it would just be seen in a few galleries in the world. I didn't think it would be released, or seen as much, so I was just doing whatever I was doing at that time.

During the nearly two-hour performance she walks in and out of shot, coos to the woods behind her, and pushes her T-shirt sleeves up to form a singlet. There is no sign of amplifiers and microphones, just her and her electric guitar meandering through a collection of random songs. You can't even see her face because the camera is too far away.

Chan: That's what he kept telling me when we talked about releasing it. So I was happy (she laughs). I just thought it was some art piece for my friend. I think he wanted to capture the action ... I don't know what the hell he wanted. I don't look at it as a performance.

The DVD package comes with a CD containing the 18-minute long track, Willie Deadwilder, which gently unravels, virtually into nothing.

Chan: I'd just woken up. I was asleep, it's like I'm yawning in the beginning, and it just goes on and on and on. It's a long song.

I love the book that comes with the dvd. So many cool drawings and pictures. Alot of the same images as featured on the artwork for You Are Free.

Its been a while since I've seen this, so I thought I would watch again and make some notes about it.

The film opens with this shot: 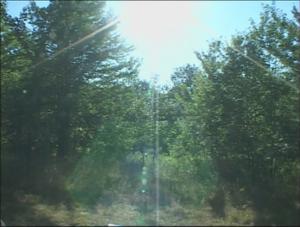 ''Time Is On My Side'' (0:00 - 1:48) - Chan sings a couple lines of this Rolling Stones cover, a cappella. You can hear cicadas in the forest. Her singing here is overdubbed onto the video for this song and 2 others, but all of the rest of this film's audio is live.

Just before Chan stops singing lyrics, the shot changes to this as Chan hums a few more bars (1:06-1:48): 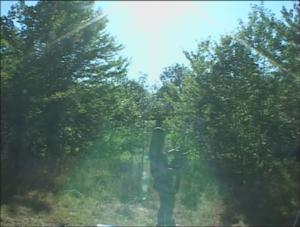 Chan enters the screen from the right and plugs in her guitar and puts it on. 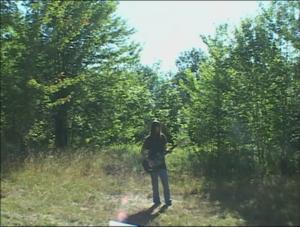 At this point, the audio is live and the cicadas in the background will continue, though Chan and her guitar are plenty audible. After a while you dont really notice the cicadas. She seems to have her guitar plugged into an amp off screen, which I assume was mic'd and she is wearing a mircophone to capture her singing. I am guessing this was all mixed on the spot straight to the camera. But I dont know if that is right at all. What was this recorded on anyway, in 2002? MiniDV, something else? It would be interesting to know. The footage has been described as grainy. I wonder how well you can see Chan? Let's see. 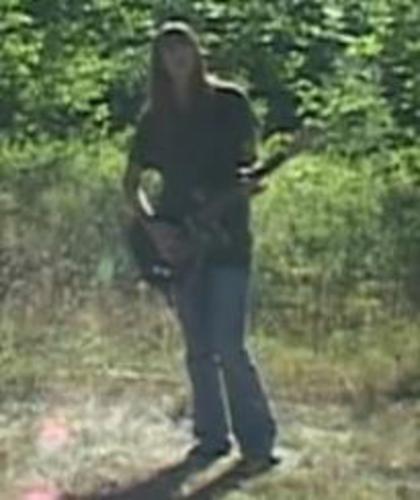 Okay, so also get used to not really being able to see her. So basically, the main focus falls on the songs, and watching her moving around. I really like the way Chan is framed in the middle of these settings. The film and idea is very natural, very unfinished.

"Night Time/Back Of Your Head 1" (1:50-5:09) - Chan has her back to the camera at the beginning and then turns around while playing. There is a false start and she starts again. She never actually sings any of "Back Of Your Head'' but rather sings lyrics from Big Star's ''Night Time" over the "Back Of Your Head" guitar part. In other versions from around the time she would sing both songs as a medley.

"Blues Licks/Baby Doll" (6:37 - 8:00) - Chan takes a moment to wave at the kids who are playing somewhere off in the distance. She then goes into what I call her ''Blues Licks'', she often would break into this sort of riff in between songs. She then begins ''Baby Doll''. But the as she wanders to the right side of the screen there is a camera cut. She never returns to ''Baby Doll'' in this film, but she does play a few others from You Are Free.

"I Want 1" (20:05 - 24:13) - I dont know much about this song. It sounds sort of like "Peking Saint". I guess this is an original? The only other concert I know where she plays this is 6/8/01, where she only sings about 4 lines. The version here seems complete with an intro and an ending part. I wonder if this is one of the 40 tracks that were recorded for You Are Free.
At the end she plays some random chords, including what sounds like ''Satisfaction'', briefly, and walks off screen to the right.

Then, we get a couple blink and you'll miss'em frames like this one: 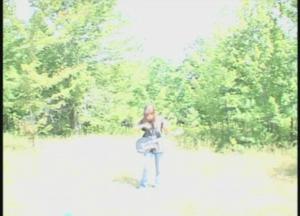 And then it cuts to this shot: 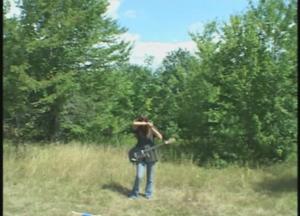 "All I Have To Do Is Dream/Blue Moon/Try A Little Tenderness Medley 1" (24:13 - 28:52)
She sings some lines of "Dream", then starts to sing the "Blue Moon" verse but stops. She goes back to the "Dream" lyrics for 1 verse, then into "Blue Moon" for a few verses, then some verses of "Tenderness", then "Blue Moon" again for 2 verses, then back to "Dream" again for a verse. She goes immediately into what sounds like the beginning of "Empty Shell" but then stops.

"The Moon 2" (28:52 - 33:17 ) - This is the point at which she starts to go back to songs she has already played. Many songs get a second and even third run through. After a quick tune up, she starts. This is complete, and kind of ends it with an extra coda of the chords.

During the song, the camera position and color balance is adjusted ending up with this shot for part of it: 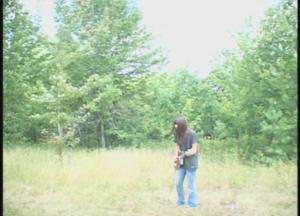 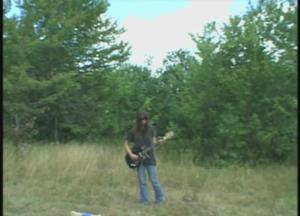 "From Fur City 2" (33:17 - 39:55) - After some random chords, Chan starts the song. Its windy now and the trees are moving. I think that, like "The Moon" before it, this song sounds better on its second take. Her voice seems stronger now. At the end of the song she plays strums a bit and rolls up her sleeves: 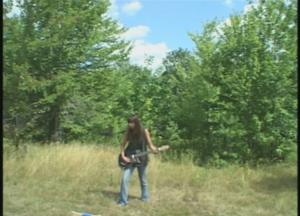 "Farewell My Enemy" (41:38 - 42:51) - Heres another one I dont know anything about. Is this a Dylan cover? A cover that Dylan played, like Moonshiner? It doesnt sound much like a Chan-penned song. In any case she only sings about 3 lines of it before ending it.

"Sad, Sad Song 1" (42:51 - 47:32) - The song is complete. During the song the camera position is again adjusted and the color balance is adjusted. At some points the picture is faded out completely and then faded back in. At the end Chan strums a bit more and makes a ''bird call''(?) to the forest. 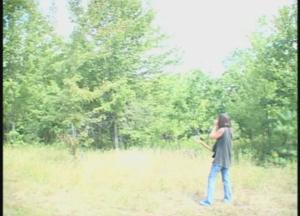 "Evolution" (49:05 - 53:05) -  Along with, "I Want", this one is a highlight of the film for me. Really neat to hear this on guitar instead of piano. She plays it in an even more menacing style than the album version. It kind of sounds like ''Headlights''.

"Night Time/Back Of Your Head 2'' (53:05 - 58:41) - She goes directly into this song from the last. After a minute and a half intro, she starts singing the "Night Time" lyrics. After the first verse, there is a pause and she picks the song back up for another verse, but then stops singing. She plays the guitar part more in a few different ways, picking, strumming and walks to the right side of the screen. She half tries to get feedback from her amp and strums randomly: 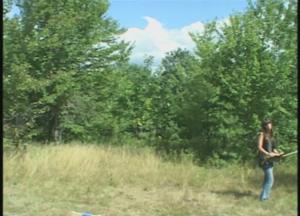 She then walks off screen and there is a cut, and we see this shot: 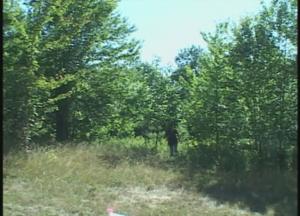 "Sophisticated Lady 1" (58:41 - 59:41) - Like "Time Is On Your Side" at the beginning, this is another part where Chan's singing is overdubbed. She only sings a few lines of the song. Unexpectedly, Chan comes through the trees with her guitar. She walks to the middle and turns around: 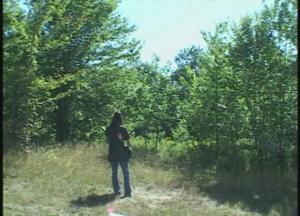 Then another cut and we see this shot: 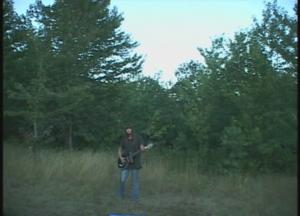 "Love And Communication" (1:14:52 - 1:20:36) - This is one of the early versions of this song and here its a lot different from the final version. This is a great take with Chan getting a kind of crunchy sound on her guitar. During this song, the camera position is adjusted again and the color balance is adjusted so that the screen becomes completely white. The image is slowly brought back to the screen: 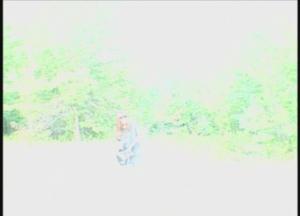 The color balance is adjusted more as the song continues, before finally settling on this: 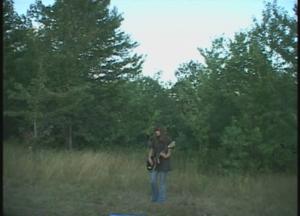 "From Fur City 4" (1:20:36 - 1:25:10) - The 3rd version of this with vocals. Her guitar sound here is slightly more distorted than it sounded earlier in the film. Also a good take with a lot of ringing finger picked notes.

"Night Time/Back Of Your Head 3" (1:29:25 - 1:32:00) - Her guitar continues to sound rather buzzy, which I think works against this song. She sings the lyrics from ''Night Time''. I would definitely say the first version of this song was the best one. She never does sing the ''Back Of Your Head'' lyrics.

"Sophisticated Lady 2'' (1:32:00 - 1:34:15) - The first version was a cappella. On this one she has the guitar, of course. This song has never really sounded that good when she plays it on guitar, IMO. I much prefer the piano versions. 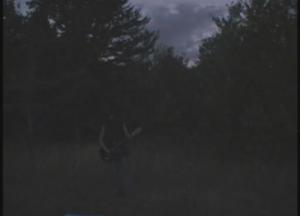 ''Lord Help The Poor And Needy" (1:40:44 - 1:42:02) - This is just a few lyrics. Like ''Time Is On My Side" which opened the film and ''Sophisticated Lady" which divides the film, this is the song that ends the film. All of 3 of these songs are sung a capella and overdubbed onto the film. While Chan is singing, we see an image like this one (Chan not present): 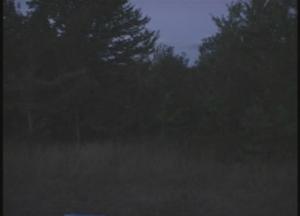 Its slowly faded brighter and darker, until its faded to a black screen for the last 10 seconds of the film.

A lot of repetition here. If I had to pick the best stuff from here, I would choose the 12 songs in BOLD:

Asked about her performance DVD, Speaking With Trees, in which Marshall wanders in the woods of upstate New York performing her material on an electric guitar, she admits she's only watched the first 10 minutes. Marshall worries she comes across as too vulnerable and exposed.

Yet she celebrates these qualities in other people's art. When conversation drifts to filmmaking and actor/director Vincent Gallo, Marshall argues the vulnerability displayed in his much-maligned The Brown Bunny is what makes it art.

Marshall admits that her vulnerability in Speaking with Trees is in some ways similar to what Gallo displays in The Brown Bunny. "Emotion is the hardest thing to project," she says. "I mean, Vincent had his dick out. That's being vulnerable, man. We're all looking for that intimacy in art, that camaraderie, and sometimes we're shunned for it. [Gallo] got shunned for it, yet that's why art exists. To communicate something real."
_________________
"Ready to get depressed?" - Chan, 11/16/13

Asked if she's bringing a full band with her to Vegoose, she replies: "I'm a professional now, haven't you heard? Get ready, man."

Asked if the band includes the same master musicians (Mabon and Leroy Hodges, Dave Smith) who appeared on The Greatest, she says: "Are you high? No, I'm bringing Superman and Charlie Brown's ex-girlfriend."

Some behind the scenes pictures posted on Maximilla Lukacs instagram. Pretty cool! 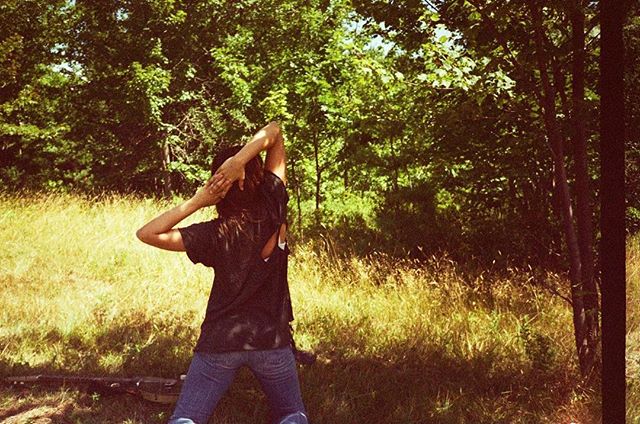 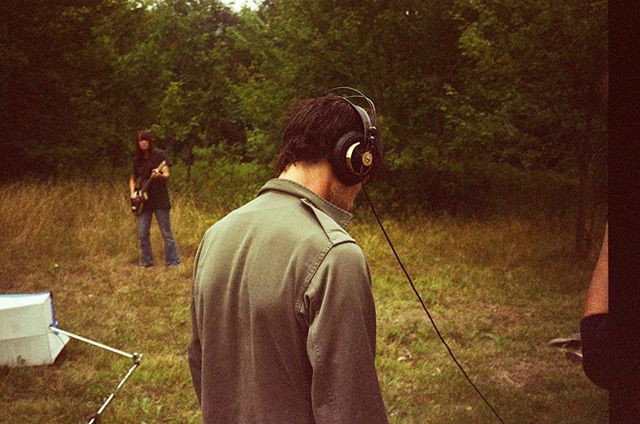 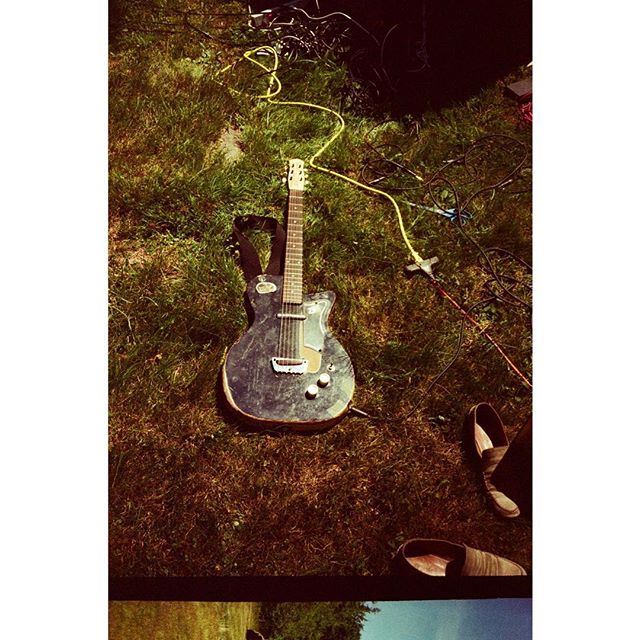