This was the 5th performance of the Australian tour. She had the band with her for this show.

The last thing you want to hear before you head out to a concert that you've paid over $40 for, is a phrase like "booed off stage" or "asked for their money back". But this was apparently the level of satisfaction at one of the Sydney shows less than a week before Cat Power's Thursday night Corner Hotel gig (with band), and the more civilised Friday night Athenaeum solo show, both of which I had tickets for.

But then, I'd also heard that Wednesday night's Corner Hotel gig was impressive, so maybe everything would be okay. Regardless, I planned on waiting to find out for myself.

Almost as soon as Chan got on stage, she achieved something that I have never before seen at the Corner Hotel. She got about three-quarters of the sold-out crowd to sit down. After suggesting that it might be a nice thing for us to do, a few audience members towards the back shouted their agreement, and, starting at the front, there was a wave of sitting. But was this a moment of pure genius, or an insane start to a very strange evening? 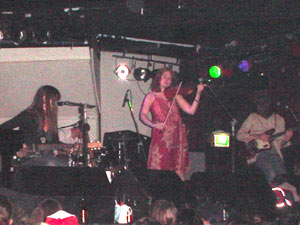 To begin with, it seemed to work. From my seated position, I could see the stage (and Chan was seated too, so usually I would not have been able to see a thing from where I was). There was also a buzz in the air - some sort of camaraderie that you don't usually see at a show where people are fighting for a standing position.

It didn't last long though. Pretty soon, people started to realise that there is a good reason not to sit down at a sold-out Corner show: there simply isn't enough room. By the third song, my right foot had so many tingles running through it that I had to stand up and wade my way through to the back, because if I'd sat cramped like that for any longer, I think my legs would have decided "forget this!" and disconnected themselves from the rest of my body in disgust. The appreciative air in the room quickly evaporated, as the audience was divided between those who wanted to stand, and those who wanted to sit.

And then the band walked off stage, and Chan began to play solo songs. Sort of. She would talk for ten minutes before starting to play, and would then stop playing after only a single verse and start to talk again - mumbling things that I couldn't hear from my new standing spot at the back, but that appeared to be mostly nonsense.

After an hour or so alone on stage, Chan had only managed to get through about 5 songs. Again, the audience was divided. People were walking out in droves, and around me, people started muttering to themselves and each other, starting with things like "get on with it!" and, after a while, "the hotel staff should just turn off the electricity at the mains, and yell out to her: 'Oh, darn, you'll have to stop playing now'. I mean, honestly, this is painful!". Meanwhile, there were others yelling out their love and adoration ("marry me!"), and sitting in a mesmerised state, hanging on her every move.

If you read an article about Chan Marshall, you'll inevitably read something about her "hard life". This hard life became the basis of many of her songs, and, as such, many of them are very personal. The intensity of these songs seem to make it difficult for her to get through them, and instead of going to hear a bunch of songs, more often than not if you see Cat Power live, you get a lot more of her than just her music.

This is what makes her shows frustrating, exhilarating, boring, or some combination of the above, depending on who you are. The inbuilt short attention span within me as a true gen Xer found it irritating, but at the same time, after being bombarded by the garbage that fills the top 40, it's awesome to hear something that actually comes from the heart. The experience is certainly different, but there's no rule book that states that a performer must follow each song almost directly with another.

When Chan sings, it's brilliant. With the band, she has the violinist singing backups to achieve the same layered vocals that are so prominent on her albums, and the other instruments make the songs feel full. And when she plays solo, her voice pierces the room and demands attention. Often (moreso on the Friday night), Chan stops mid-song and talks about the line she's just sung, perhaps explaining more about the life of one of the "names" from the song of the same name. These interludes are fairly unique, and I welcomed them, as they added something (as opposed to just hearing an album note-for-note), but after having waited so long for the song to start in the first place, they were sometimes annoying.

This is the power of Chan. She divides a room like no-one I've ever seen, and she is the essence of the saying "you either love her or you hate her". But, at the same time, she's not. She's not, because even within a single person, there's division. These people are torn between annoyance and fascination, and if you ask them what they thought of the show afterwards, they won't know exactly what to tell you. 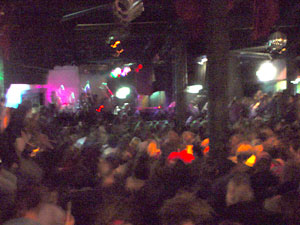 I saw Cat Power at The Corner last night, and it was the most rawly emotional thing I've ever seen. Brought me to tears, and has made me think about music in a completely different way. I think Chan has accidentally created a moment of definition in my life. It was the best show I've ever been too.

I thought Thursday's show was fucking amazing. I've never seen the dynamics of a gig so turned upside down. Chan is just one of the most alive people I've ever seen on stage (you don't have to prancing around like Cedric Bixler to have character) and the music just hit me like a freight train.