At this point Cat Power had been touring for 2 weeks. Making their way through the southwest, the band had played shows in Arizona, New Mexico and California. This was the 11th concert of the tour. The concert took place at Bimbo's 365, an older venue. According to wikipedia, the main stage room can hold around 700 people. This was a week-long festival running from 2/25/03 to 3/3/03. Also on the bill were Chan's friends Smog and M. Ward.

Unless something else pops up this is the first concert recording we have from the tour. It was recorded from the audience. The copy I have was a single mp3 file which I split into tracks to put on a CD. I believe it first appeared on a blog years ago. A big thank you to the person who recorded this. The recording seems to have been edited to remove dead space between songs, so there is almost no in-between song banter and we can presume the concert was longer than 74 minutes. There are a few short fades at the end of songs. The sound is reasonably clear thoughout and is in stereo. All instruments and vocals can be heard very well. There is a bit of distortion in the recording at the start but it sounds like the person recording this seems to have noticed and sorted this out. There is a bit of chatter during the first half but it's never distracting.

In contrast to her concerts in the previous years, the setlist is heavy on originals, with only 5 covers out of 17 songs. Also interesting is that she plays at least one song from all of her albums released at this point.

"Baby Doll". The song begins with a kind of native american sounding chant from Chan and Coleman, before leading into the verses. Here we have the full band playing. Chan played the first half of the show on guitar always in a clean tone. Coleman's guitar sound varied from song to song, sometime very distorted, and other times just sounding alittle fuzzy. So its easy to tell them apart. Margaret played violin on this song.

"Sad, Sad Song". The band sounds very tight on this, especially the drums. Chan asks for reverb for the guitars mid-way through. This is an M. Ward cover, which she also plays in the Speaking For Trees DVD. The song ends with loud applause.

"Taking People". This is the only live version of this I have heard. Very cool that she picked this track from WWTCT for the concert. Coleman plays a little slide on this to emulate the studio recording.

"Rockets". This is very rocking. Again another really cool older song making it into the setlist.

"I Dont Blame You". For this one Margaret plays a keyboard part, while she and Coleman add back-up vox. They sing the chorus part that Chan overdubbed on the album version.

"American Flag". Similar to the way this was played on Chan's Moonpix tour, this features alot of feedback and string scraping from Coleman. Margaret plays bass on this and so the song has a heaviness that is not often heard in Cat Power concerts.

"Werewolf". At this point things start to get alittle mellow. Coleman sings a bit of backing vocals on this. Margaret is again on violin and sounds really good, especially on the outro.

"Fool". Chan and Margaret essentially sing co-lead vocals on this with Margaret taking the higher parts.

"Good Woman". Margaret and Coleman add back-up vocals to this like the album version had. Violin is also featured. She even manages to finger pick some of the strings like on the album as well.

"Nude As The News". This is really interesting. Someone shouts out for "Metal Heart" at the beginning, then the band kicks into the song. Part of the way through Chan goes into her WWTCT/Moonpix voice and just sounds so cool. Before Chan gets to the "All over, all over" part the song falls apart disappointingly with Chan saying "Sorry, it just sounds like garbage-shit-fuck up here. I'm tryin'. It just sounds BAD. It just sounds BAD up here. It just sounds like shit-fuck-ass. Sorry. Maybe we'll go over there" Presumably she means the piano. While this is going on many people in the crowd are telling her it sounds good. I have to agree, it sounds good to me. I'm not sure how often this was performed on this tour but in any case, this is the last version of this that I have, apart from a few half-hearted attempts from 12/16/03. Later, in 2006 she would incorporate a few verses into her updated "Cross Bones Style" with the Memphis Rhythm Band.

"Maybe Not". Margaret sings along with Chan on this. Chan is now on piano. It's longer than usual because part way through Chan asks for reverb and sings a chorus again. Then at the end she repeats a verse. Like other songs from this show, it's neat to hear this with a band but I think I prefer this song done with just piano.

"Why". Just about every song on this recording has short fade at the end so we dont get to hear the band leaving the stage. But from here on out Chan plays solo. Also at this point the audience is nearly silent for the rest of the show. This is unreleased song. It's played and sang well, but I like other versions more. Chan does this as a medley with the next two songs playing them all right in a row with barely a pause.

"Can I Get A Witness". Chan says "This is the part where you guys laugh" at the beginning. I think she only played this song in 2003.

"When I Lay Me Down". Another unreleased song. I dont know the real name of the song. Chan says "This is the more boring part" at the start. This is played and sang really well.

"Blue Moon - Try A Little Tenderness - All I have To Do Is Dream Medley". Chan is now on guitar and says "I dont need any vocal in the monitor, I'm sorry, Jason. Or guitar".

"My Daddy Was A Musician". Another unreleased song. I dont know the real title. She doesnt sing much of this, remarking "It's not gonna work." At this point the concert is over. 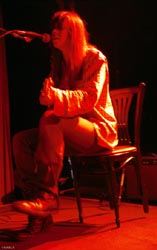 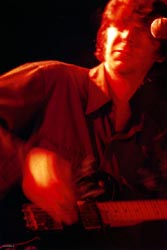 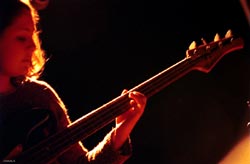 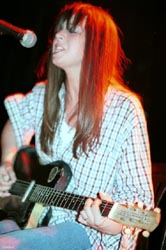 "Blue Moon - Try A Little Tenderness - All I have To Do Is Dream Medley". Chan est maintenant à la guitare et dit "I dont need any vocal in the monitor, I'm sorry, Jason. Or guitar".

I've been listening to this recording for the first time yesterday and i enjoyed it a lot. I can hardly believe that it has been sleeping on my hard drive, barely forgotten, for so long!
Thank you Cokelike for showing us the way to the good stuff!
I think that i prefered the first half of the show, with the full band. As you said, it sounds very good and what a delight it is to hear such nice renditions (even if aborted) of older songs like "Nude as the news".
Honestly, i wasn't even aware that Chan was touring with a band at that time. I thought she was a solo act around 2003. How wrong was i ?!

Definitely a "must listen" and as the song says: a splendid time is guaranteed for all!