This was the eighteenth performance of the tour.

Set List:
The Greatest
Cherokee
Silent Machine
Manhattan
Human Being
King Rides By
Sun
Bully
Angelitos Negros
Always On My Own
Back In The Days
3, 6, 9
Nothin But Time (featuring Lucia Ribisi on vocals)
I Don't Blame You
Peace and Love
Ruin

I just got back from the show. What an experience. Give me some time to gather my thoughts and I will post something about it.

This video is very cool if a bit shaky: it gave me the feeling that i was there!

"11:44 PM: A young teenage girl in a pink confection of a dress has bounded on stage to sing "Nothin' But Time" with Cat Power. I suspect it's her ex-boyfriend Giovanni Ribisi's daughter, for whom she wrote the song."

Yesterday morning I woke up as excited as could be. Grabbed my tickets, grabbed my Cat Power Dear Sir record, three different colored sharpies. Spent the day wasting time in Hollywood until I got in line at about six thirty or so and only two people were ahead of me in line. As the time grew nearer and nearer the line outside grew all the way down the street and around the corner. I think we were let in at around 7:40 or so. Saw the merchandise table, but I decided that getting a spot at the the front of the stage was my top priority. So I got my spot just to the left of the stage (from the audience's perspective). Someone saved my spot for me, so I went and bought a copy of The Greatest record with the alternate cover. There were some thrift store clothes with the cat power logo screen printed on the back that she was selling, but I didn't pick one out.

Anyways, the first opener started and it was some electronic trio all dressed in white. I wasn't too into that their music. The second opener was entitled The Goat & The Occasional Others. What no body knew is that The Goat is comprised solely of professional skateboarders, a skate photographer, and a skate filmer. They aren't playing music to be professionals, but solely to have fun. I had a blast while they were playing, but others tended to disagree.

It was now about 10:30. The band finally came out with the exception of Chan. Nico was strumming these few notes over and over until finally Gregg joined in with the piano. That still wasn't enough. About ten minutes had passed and the crowd grew restless and really started to get upset that she wasn't coming out. She came out and The Greatest was the first song they played. During this song she walked out to my side of the stage and I reached out my hand and she did the same. The night continued with lots of other songs (I will put a setlist at the bottom) and everything went well as far as I could tell. She kept signaling that something was wrong with her mic, but it sounded great to us. Her earpiece must have been off. She didn't really talk to the crowd all the much aside from maybe two or three times, including "I'm a grown ass adult, I fucking appreciate you coming out here" and "I thank y'all for being here. I fucking thank y'all for being here. I care about all of you." During 3, 6, 9 I held up my Dear Sir record and a sharpie and she looked at me and whispered, "Just a sec." Next they played Nothing But Time and Gregg sang back up vocals in place of Iggy. About halfway through, a girl came out wearing a pink dress and started to sing with Chan. It was never fully announced, but my guess is that this is Ribisi's daughter, for who she initially wrote the song. After that she played I Don't Blame You with tears in her eyes. After the song, I held up my record again and she ran over "Hey, how are you? What's your name honey?" "Alic" "Allan?" "No Alic. A-L-I-C!" "Oh Alic! Okay" she started to sign with a brand new silver sharpie I handed to her, but it seemed to not be working very well. "No! I'm sorry. It didn't work. Thanks for all your support." She gave back the record and sharpie and went on to finish the show.

Chan Marshall signed my record. I still can't believe it. This woman I love and respect so much crouched down three feet away from me and signed my record. The marker gave out and she apologized! She was truly sorry and that just blows my mind. Yeah, the autograph is hard to read, but it's there. "ALEC ♡ XX" That brief interaction means more to me than she will ever know. On the drive home I was thinking about how she refers to Bob Dylan as God Dylan and I've decided that I will no longer refer to Ms. Chan Marshall as anything less that Queen.

Set List:
The Greatest
Cherokee
Silent Machine
Manhattan
Human Being
King Rides By
Sun
Bully
Angelitos Negros
Always On My Own
Back In The Days
3, 6, 9
Nothin But Time
I Don't Blame You
Peace and Love
Ruin 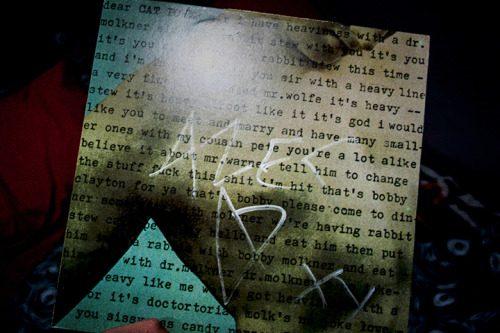 She signed your LP during the concert?!

I would never dare such a thing!

Hopefully this american tour is now over, otherwise i would have became slightly jealous.

Yeah it was during the concert! In between I Don't Blame You and Peace and Love she ran over and signed it for me. Still completely in a trance from meeting her. I don't think I have a favorite musical moment. The way she was lit for Angelitos Negros was absolutley beautiful. Every song was so beautiful. No interruptions or problems during the entire performance. I never would have expected Angelitos Negros to be my favorite performance, but I think it might have been.

Thanks for this nice review! I'm happy for you.

I saw some comments on Lucia Ribisi's instagtram. Some people congratulated her for her performance.
That must have been pretty strong for both of them to sing that song together...

Wish I was there too.

I don't blame You 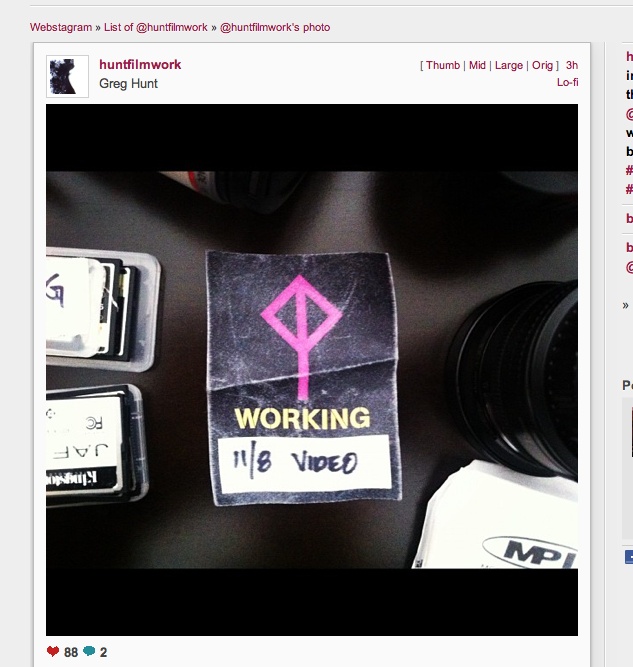 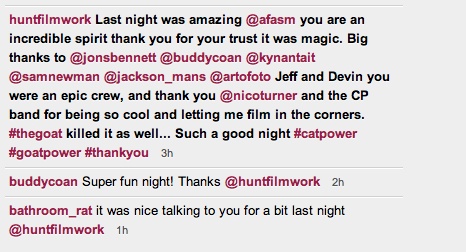 Greg Hunt was the director of photography of the Cherokee video. Did he filmed the concert for TV or for a documentary?

Whatever the reason, it's so cool to know that he did it! There's a chance that we'll see that one day.

Always On My Own: 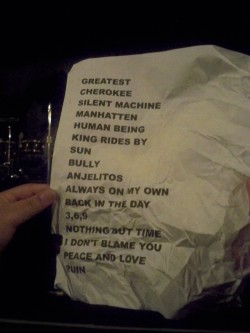 Nicolaoua wrote:Whatever the reason, it's so cool to know that he did it! There's a chance that we'll see that one day.

I asked Greg Hunt by e-mail. He answered me that:

"Hi Sabrina.
Yeah the concert wasn't filmed for TV or anything- we shot it for Chan.
Not sure what exactly will be happening with it yet, but definitely something!
Greg"