Soundcheck (Parts of Living Proof, Paths Of Victory, Wild As The Wind) - 0:46

These were the thirty-seventh and thirty-eighth concerts and nineteenth and twentieth solo performances of the tour.

The setlist is really cool because she takes it everywhere. She plays a majority of "The Greatest". She plays four songs from "You Are Free" including "Maybe Not" for the first time in a while. She plays newer originals like "John, John" and "Oh, Time". She reaches back to the Covers Record era for "Kingsport Town", "Deep Inside" and "Paths Of Victory". She even points to the DDBB with "Ramblin Woman". Also, at 107 minutes this is one of the more longer Cat Power concerts. Thanks to Basshead for recording and sharing this. The recording is a stereo audience recording. The sound is good for the most part, but the volume coming from the stage varies a lot during the show which causes some problems. Note that there is a really loud volume increase during "The Greatest" that only lasts 1 second.

First, the Soundcheck, including parts of Living Proof, Paths Of Victory, and Wild As The Wind, 0:46:

"The door to the back of the venue was open, so several of us watched as she warmed up." 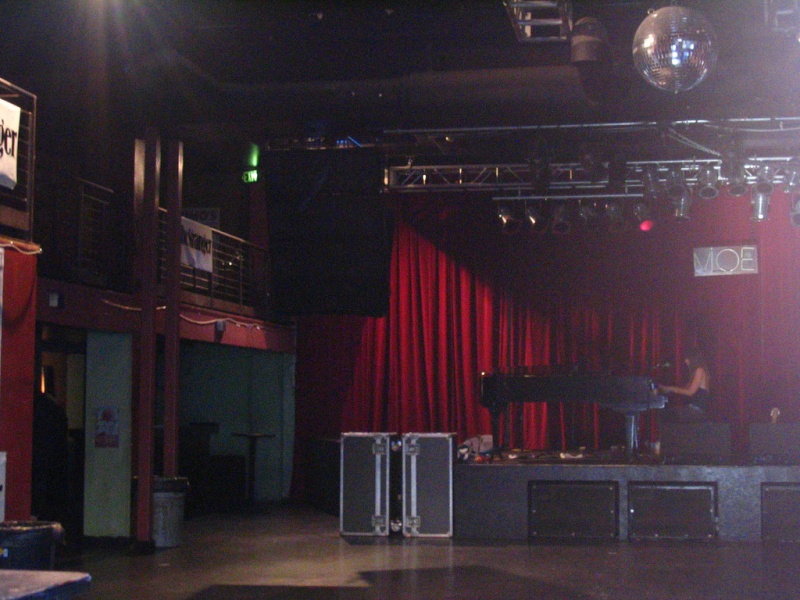 Though we have video that a soundcheck was done, Chan will still request a lot of adjustments during the concert.

"Love And Communication" - "How're y'all?", Chan asks to cheers from the audience. I've read a lot of people mentioning her requests to have people sit down at her shows. Finally, we get to hear this. "I dont know if y'all feel like sitting. If you'll just wanna start from the front and you'll feel more comfortable. Its really comfortable to sit, right?" Chan plays the song on her electric guitar. "Not enough reverb on the vocal", she says after a verse. "A little less vocal in the monitor, please." At the end of the song she says, "Is there any way to get more reverb on the guitar and the vocal, please." She then tunes her guitar for a moment.

"House Of The Rising Sun" - A great version.

"Hate" - Also really good. "The vocal sounds a little crispy", she says at the end.

"Ramblin Woman" - Even though she already had a lot of reverb in her sound, there is even more added at the beginning of this song. She stops after singing a verse and says, "It sounds a little bright and crispy. Maybe a little less monitor, vocal monitor." She starts again. Her sound is now characterized by a loud WOOOOM or a piercing feedback.

Suprisingly she keeps playing right through this. She even almost makes the feedback work for her by letting it fade in and out right in between the title lyric.

"The Greatest" - "Someone stole my adidas last night off the stage." Chan says before starting this. "I think the piano's a little hot too. Sorry", she says at the end. This is a good take.

"Wild As The Wind" - A bunch more feedback has entered the sound. "Anyway to get more reverb on that vocal? Sorry. Take some of that high end out. Sorry", she says after a few verses. She ends this differently than she usually does. "Sorry. Sorry, I just love reverb on the vocal. I actually sing, project more when theres reverb because when theres not I kind of reserve. When theres like a lot of room, I tend to project more and relax."

"Who Knows Where The Times Goes" - "Can I get some more vocal in my monitor?", she says at the beginning. A very good version. She goes right into the next song.

"Empty Shell" - She back on her guitar for this song. She playing this a bit more upbeat here similar to have she had been singing with the MRB. She also randomly throws in a the word "Sucka" in the lyrics a few times. She tunes up for a moment at the end.

"Could We" - Still on electric guitar for this one. "Is there any guitar in the monitor?" Chan asks at the end. She then begins "Good Woman" but stops quickly and tunes up again.

"Wolf Among Wolves" - "Is there any way to get more reverb on that vocal?" Chan asks during the song. This is especially good. "I just love reverb on the vocal so much, we know Chan, shut up, okay." Chan says at the end.

"Where Is My Love" - Now back on piano and she sure has reverb as a huge WOOOOM appears.

"Maybe Not" - She transistions into this song and the audience applaudes, Chan says "I dont know, I dont know." She starting singing but stops and says, "Are you all mad at me? I know you are all getting that way. Is Maggie here?" She appearently is and Chan chats for a minute. She then restarts the song. A great version.

"I Dont Blame You" - The audience applaudes again when Chan goes into this song.

"Satisfaction" - Back on guitar for this song. Sang with the chorus. At the end a funny moment happens when a member of the audience asks if he can stand. "What did you say? Yeah, go ahead, stand. You can sit." Chan says to laughter from the audience. "Oh, you have the skinny jeans. We should sue them." She says to more laughter.

"Remember Me" - Now back on piano. Though she says "That sucked" at the end, this is a highlight of the concert for me. Actually, this whole series of pianos songs at this part of the concert is a highlight. "I'm gonna do a couple new songs that y'all dont know. You might have heard them before though somewhere in the past couples years, somewhere, maybe not, most likely no."

"Oh, Time" - Always a treat to hear this song. A great version.

"Why" - Also great, she is very much in her piano groove at this point.

"Lived In Bars" - A somewhat hestitant version but also a unique version in the way she phrases lyrics. She goes directly into the next song before anyone can start clapping.

"Islands" - "This is a song, kind of like for Jesus, to Jesus for Buddha Allah thing. Who wants to bet that I'm going knock the fan over? Me! Watch." She is now back on guitar and its much louder than it was before.

"Crying, Waiting, Hoping" - She starts into this song from "Islands" almost unnoticably. This is better than previous versions. "Is there any way to get more reverb on the guitar? Sorry, fuckin' broken record. Excuse me, for cursing. Sorry. Y'all have cursed. I know it." She then relates a funny story of her and her little sister when they were young, and Chan was daring her sister to curse.

"Good Woman" - This begins with a lot of tuning and Chan says, "Thats why I didnt play it before because I messed up the vibe, the flow, the chi." She then restarts and the audience claps. But Chan quickly stops and starts tuning again. She then restarts again. "Bob Dylans got a new record out, I dont know if anybodys heard it, but I cant wait to get it, it's got five stars." Chan says at the end.

"Kingsport Town" - A total rarity at this point, this is the last version of this I have. All the other versions of this I have come from 1999 to 2001. This sounds great with her hypnotic guitar playing. Another highlight. After this Chan chats with the audience for a couple minutes with some friends who are the show. Shes asks what time it is and worries that she has run over her time slot.

"Deep Inside" - Played on piano. She has a bit of trouble finding the key at the beginning. Like "Kingsport Town", this is also the last version of this song I have.

"Paths Of Victory" - This is a fun version with Chan singing "Whoops" in the middle. Not a bad version.


"I Cant Give You Anything But Love" - "Thanks for coming", Chan says and then sings this a capella to end the concert. 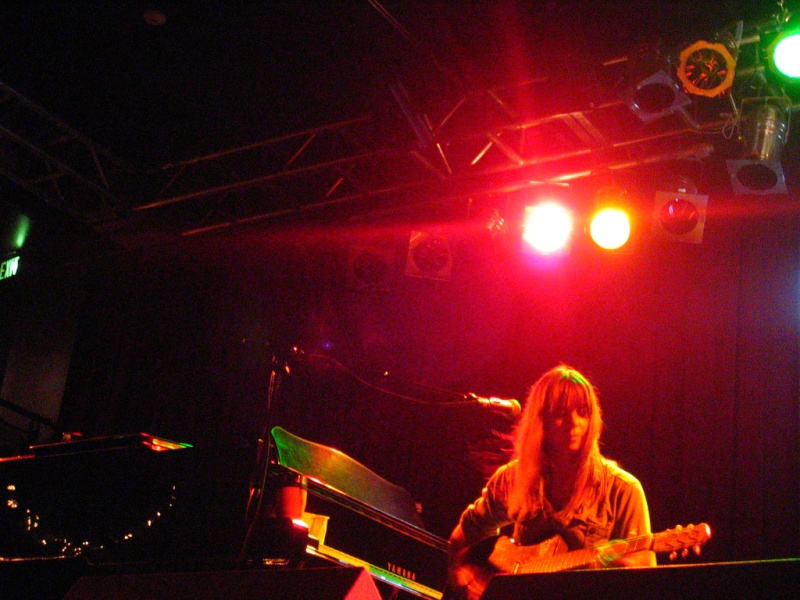 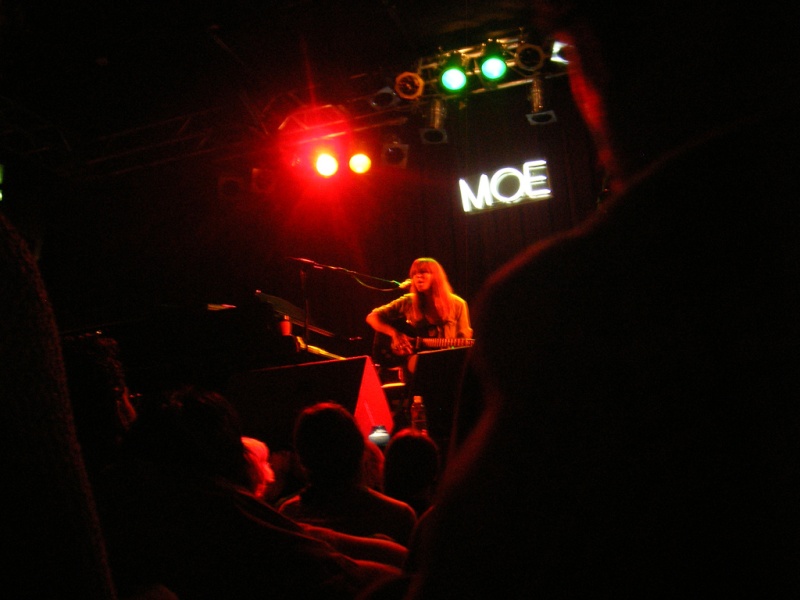 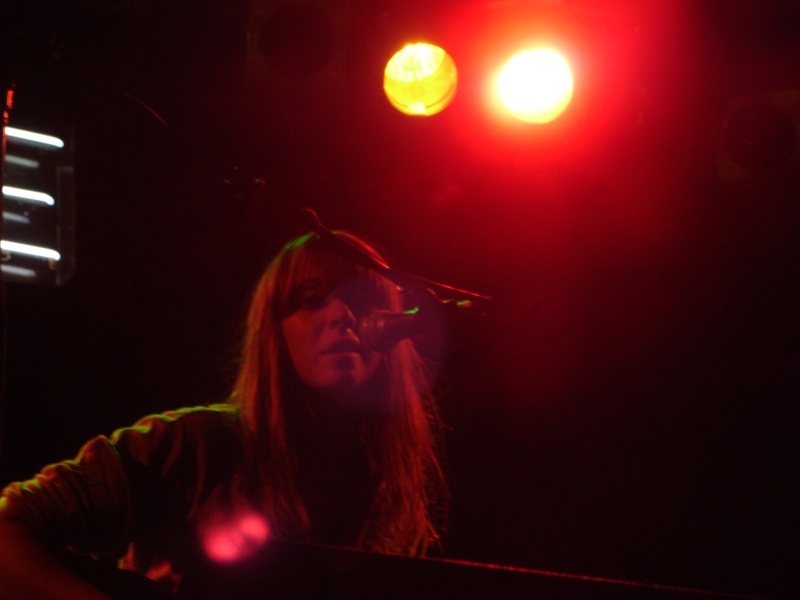 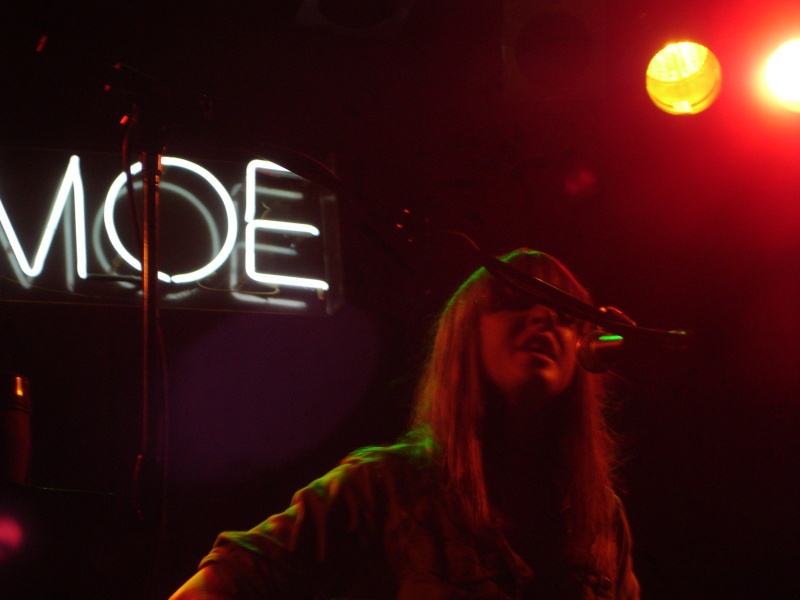 6 Pictures (not sure which show) 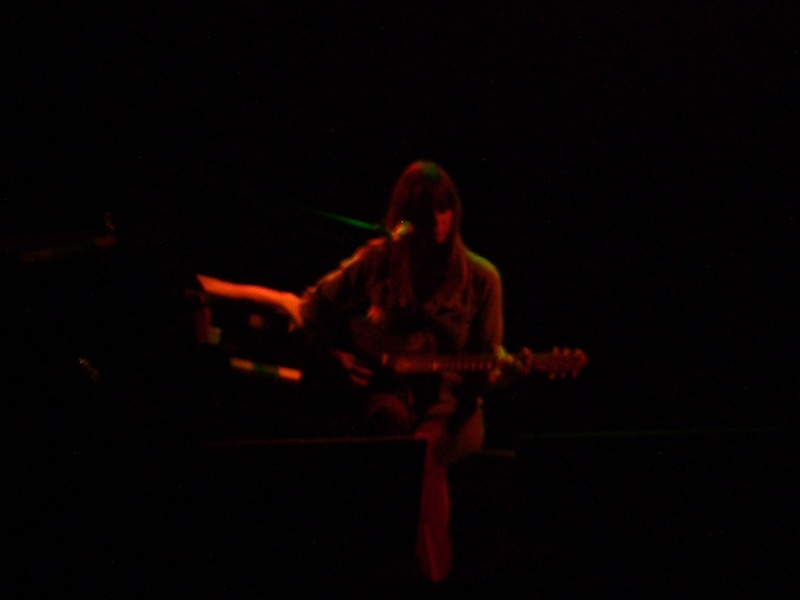 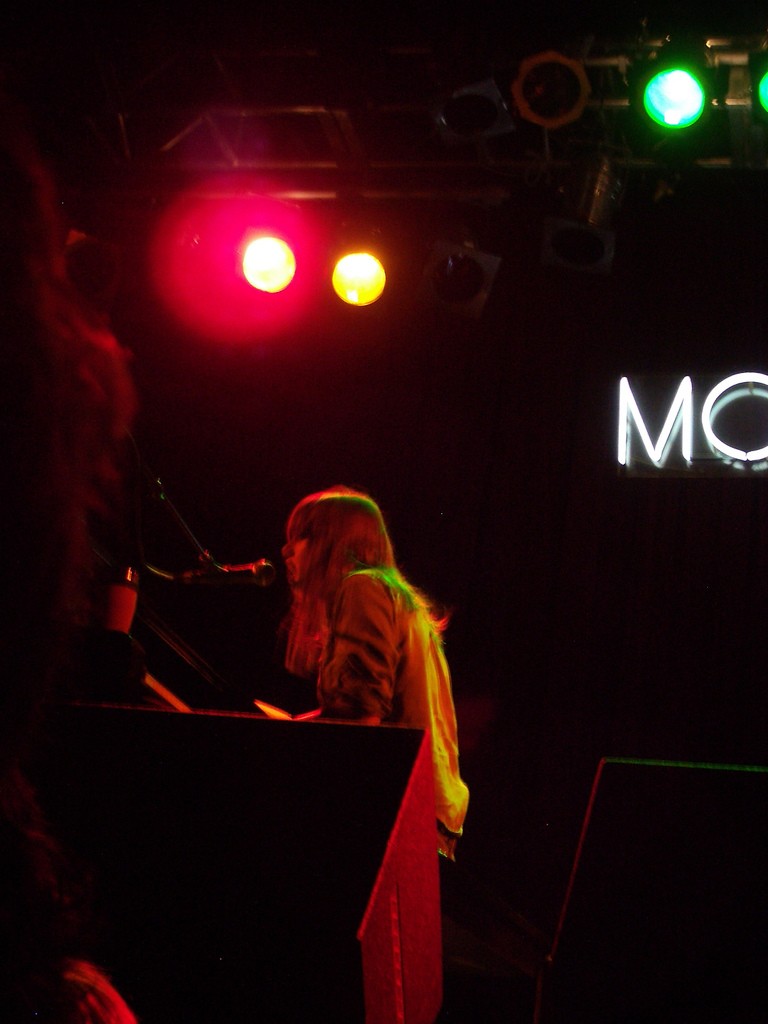 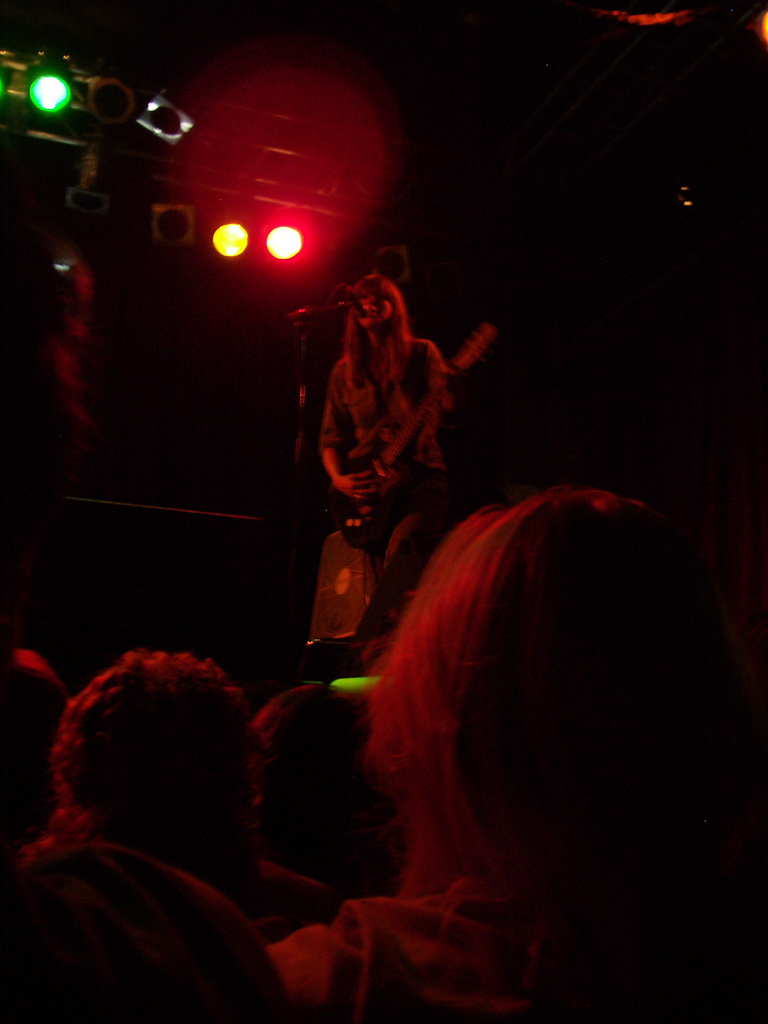