Incomplete setlist:
Soul Serenade
The Greatest
Living Proof
Lived In Bars
Could We - *
Empty Shell
Islands
The Moon
Willie
I Dont Blame You
Who Knows Where The Time Goes
Wild As The Wind
All I Have To Do Is Dream - Blue Moon Medley
House Of The Rising Sun
Hate
Love And Communication
The Tracks Of My Tears - 2:26
Total Time - 2:26
* = Assumed to have been played.

Her first concert in London since "All Tomorrows Parties" back in 2005, also at the Barbican Center. This means that if you saw both of these concerts, you would have heard her perform The Covers Record and nearly all of The Greatest. This concert was originally scheduled for 3/4/06. The concert features what might be the first performance of the Smoky Robinson song, "The Tracks Of My Tears", done here with most of the band joining in at the end of the concert. Later on, Chan would add the song to the DDBB's setlist in an uptempo version.

The Tracks Of My Tears:

See the girl with the stage fright. Standing up there giving it all her might. She got caught in the spotlight. But when it comes to the end, she wants to do it all over again.

And the band played on. After two Memphis jams from Teenie Hodges and his Hi House Rhythm Band - and a 12-strong accompaniment means a lotta rhythm - it was anybody's guess whether Chan Marshall had in fact left the building. Which, given the labyrinthine dimensions of London's Barbican centre, isn't as easy as it sounds.

But as the chamber strings of The Greatest grind down the tempo, here she is. Just in time too. Teenie and his super-session dozen could be the Million Dollar Quartet for all it means to this crowd. They're here for the main attraction. Cat Power and her songs of brutal sympathies and delicate tragedies, strange comforts and unsettling familiarities. A paradox of virtue and sly sensuality, as mighty as aphrodite and as frail as Icarus without his Factor 10.

With just baby-blue nail polish for shoes - I guess there's a band to finance - Chan skips lightly, not quite like a ballerina, but like a slightly-tipsy girl who's become homecoming queen by some weird default.

The khaki overshirt and black one-piece, complete with door-knocker medallion are a stylist-commission away from the ungroomed squatter-shop gear that Chan sported last year at the Queen Elizabeth Hall. The Joni-straight tresses look to have been treated to salon-only cosmetics, and have just a touch of Quatro, the patron-saint of ladyrockers. In fact, in a very, very deep, spiritual-only way, this correspondent declares Chan to be looking very, very cute. Which, no doubt, will please her no end.

With band to show-off, the set has something of a verbatim feel. Chan's arms move around, uncertain without the security-blankets of piano and guitar. At times, stressing the changes and licks there is just a curious echo of Cocker in the gesturing.(Joe, not Jarvis). Thankfully, this is kept to a minimum, but still one still hopes for a Cat Power run through of Delta Lady.

It isn't until Empty Shell that the script first begins to deviate. Cat and the band bring Bakersfield to "London's Ugliest Building", afore shifting due east to honky-tonk and Nashville'd-up The Islands, replete with square-dancing and steel guitar. Stuffed into those country-pie bookends are a re-emphasised via kick-drum The Moon and a warmly welcomed Willie (oo-er, missus).

And there began the change. The much truncated Willie was the first switch in intensity. Chan's nervous gaiety threatened to dissipate, as though the premature applause made her think twice of the worth of the song. Later, solo at the piano, she chooses to perform I Don't Blame You one of the few original songs outside The Greatest to make the cut.

I Don't Blame You, the lead-in on 2003's You Are Free, is all cross-section and ambivalence. The travails of the song's protagonist delineate the performer's simultaneous need for attention and distance. When the crowd clap in Willie, Chan looks anxious to make the song her own again, but of course it slips away from her. Willie's tale of love gone right in the face of adversity and cynicism inevitably hatching other versions and interpretations in the imagination of others, finding a new life beyond her.

The desire for community and the right of solitude may best sum up Cat Power's practice of running through other people's songs. After treating us to her 'British' accent - as close to Hayley Mills as every other American's English accent - Chan summons up the ghost of Sandy Denny's Who Knows Where The Time Goes, its 'deserted shores' forming an archipelago with her own topography of sea-staring and beached desires

A much improved run-through of Wild Is The Wind ends abruptly with 'When you kiss me...I'm distracted..." Chan struggles, once again, with the baleful heat of the lighting rig. Chan Marshall struggling with the spotlight is such a trojan horse of gift of a metaphor that it would be impolite not to mention it.

But no matter how distracted Chan is, the air of redemption is palpable through every half-boogie and every playfully lowered-octave of her surprisingly flexible voice. Whatever 'health issues' caused the original tour to be postponed look to be a thing of the past. To nail the point home , the blankness of Hate is switched back on itself, the suicidal edge of its grim tag-line reversed, hinting at a paradise regained.

Long, long after the house-lights have beckoned tube-time, long after Teenie and co. almost turn Love And Communication into the Zep's Kashmir, Cat still haunts the safety curtain, miming taking tea in a doff of the cap to British sensibilities. There's one time for an impromptu Tracks Of My Tears and then its over.

Where does all this time go, anyhow?

It is a foolhardy thing to look forward to a Cat Power gig too much. Though Chan Marshall - the contrary personality behind the moniker - tends to turn up, she doesn't always stick around.

This time, there are 12 people on stage to tackle her if she tries to leave. They are the Memphis Rhythm Band, who back Marshall on her latest, soul-stacked album, The Greatest. The band, including Al Green's guitarist Teenie Hodges, somehow bring out the disciplined side of the often shambolic singer-songwriter. She appears with a breezy wave, and launches straight into the soft southern soul of the album's title track. Setting down the large cup of tea she slurps from - she's addicted to tea, she reveals - Marshall flexes her muscles and runs through a gamut of twitches and dances, a ball of nervous energy.

Like her songs, Marshall is a captivating mix of innocence and worldly experience. She takes off her khaki shirt, revealing a black strappy top, then turns coy, holding the shirt to her chest as if she's just been discovered half-naked.

If Janis Joplin's voice was all bourbon and shards of glass, Marshall's is cigarette smoke and pools of tears. The strings, brass and mellotron keyboards embolden the woozy regret of Lived in Bars and the sparse, haunting Where is My Love, smoothing out Marshall's cracked, rough edges. Like a series of velvet-covered punches leading to a knockout, each song is more powerful than the last.

But when Marshall is left alone on stage, it all starts to get horribly familiar, as her new-found professionalism falls apart. She is frustrated during House of the Rising Sun, then her interpretation of Hit the Road Jack ends ingloriously. "I'm distracted - I'm sorry," she says, visibly angry with herself.

Back in the bosom of the band for Love and Communication, Marshall manages to bring a little tension to the endless, churning melody. If only she could keep it together like that all the time. 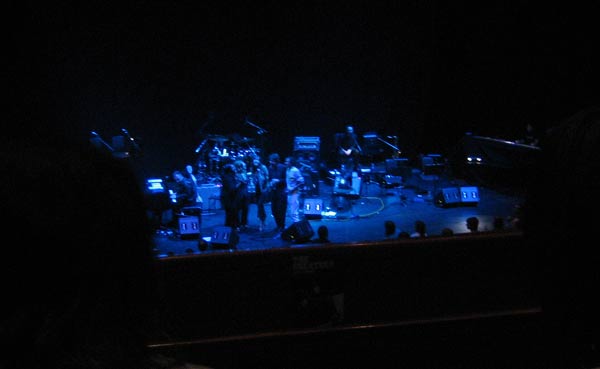 It was GREAT. The Greatest songs sound so good with the full band. Chan was in a good mood and she looked splendid, and is very amusing with her idiosyncratic dancing.

She played songs on her own too, at the piano and guitar and just singing, including a cover of All I Have To Do Is Dream by the Everly Brothers.

The view at the Barbican was excellent and sitting down at a gig was quite a pleasant change!

It was fandabidozi! I cried during "Lived In Bars" and Chan came back on for an encore which Ive never seen her do before.

I saw her last night in London and it was fantastic. So good with the full band and the songs off The Greatest were fabulous.
When they struck up the opening to Living Proof I was in heaven! I don't think she's ever been bad but I know her erratic performances haven't been to everyone's taste. She did proudly proclaim her sobriety last night!

I was absolutely blown away by the Cat Power concert at the Barbican, last night. Having heard some negative reviews from friends on past gigs, I thought I might be disappointed, but her voice sounded amazing and the Memphis Rhythm Band were great too.

The highlights were without a doubt 'Love & Communication' and after the encore, an impromptu rendition of 'Tracks of my Tears' which had the whole audience clapping and singing along. There was a real sense of the crowd being very supportive and the standing ovation at the end was indicative of that.

Yes it was great. Highlights for me were definitely The Greatest and Living Proof. I loved her little bits of English accent she did when talking about tea and shopping.

The setlist was a little uninspired because she played all of the songs from The Greatest in the same order as on the record. Would have been good to jumble them up a bit to make it less predictable. But then she sang "I don't blame you", a song at the piano that I don't know which she ended early anyway, House of the Rising Sun, Dreams and Blue Moon, Tracks of my tears. There were others, but I can't remember them....altogether some excellent music.
_________________
"Ready to get depressed?" - Chan, 11/16/13