The second of her two Japan concerts this year. This was also a solo concert. Woman & Chilrden opened again. 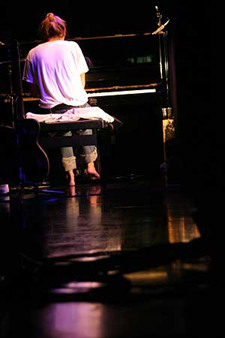 Within one of Tokyo's most famous entertainment districts is the seedy, neon-plastered, pachinko ringing adult playground known as Kabukicho. And here, within this epicenter of beautiful wanton filth is Shinjuku Loft, a tiny venue buried deep below the gritty surface. Usually geared for metal or punk shows, this night was a special twin performance of femme fatale vocal power that defied all the usual gig protocol. Irreverent, meandering, unapologetic in their stop-start ways, both Women & Children and Cat Power somehow escaped the expected dismay that would surely be the kiss of death for most, deftly delivering their specially wrapped goods for consumption for those quietly standing along the perimeter amongst the mass neatly gathered and seated in the front and middle.

As the international indie masses descended the steps into Loft's darkened coziness to fill the voids formerly present, an increasing tension filled the air with anticipation for a night of sweet delectable treats starting with Women & Children's June Serwa and punctuated fully by Cat Power's Chan Marshall in this most minimal staging for both old and emerging talents. And perhaps it was this staging itself that helped dictate their raw performances of absolute abandon that played beautifully to a gathering most interested in retrieving a rare and intimate portrait of both artists who willfully laid bare in their solo outings this night. If that was the case, mission accomplished in that June and Chan dropped their guard willingly and wholeheartedly to the glee and amazement of all inside.

Without her usual compatriots of Kevin Lasting, Jamie Moon and Oliver Robert in tow, a solo dressed in black June glided across the tiny stage to her waiting piano as the lights dimmed and a quiet hush filled Loft as if it was a professional recital in the making in this family living room. More intimate than any Unplugged event ever could possible be, it was all just hung out there to both soak and then dry in our consciousness. Clearly ill at ease unless performing as her nervous, yet disarming banter proved, June shared her soulful, yearning vocals with either her guitar or piano. Facing away as she played on the piano, an almost sheepish June beautifully plied away on “Lovely Girl” as well through the delicate mid-section ivory-fingered strength found in “Life Or Death.” She took a soothing respite with a spoken word. Drifting in and out, June's dominant sultry, sedating vocals evoke blending parallels to Siouxsie Sioux and Nico into her own wondrous mix that simply hypnotized all present. Best summed in her own willful words, “I could love it if you wanted me too…If it would get me to you.” Whether self-realized or not, June's buoyant yet sad optimism was graciously and warmly taken in as her departure garnered a most endearing round of applause as she bowed almost embarrassingly upon her exit.

And with this exit, a happily warmed gathering increased its communicative existence as the drinks continued to flow alongside the rising chatter, North Carolina's Chan Marshall, a.k.a. Cat Power, took to the stage with a wide welcoming smile across her face and a subsequent immediate calm within Loft. And as if to foreshadow her own relaxed uninhibited performance, she uttered, “ Are you all comfortable? You know, you are free (smiling) to do as you like: Sit or stand.” And while the vast majority in the center floor chose to sit, make no mistake that there was an omnipresent standing attention deep inside the faithful present to Chan's every move, every stroke, every word hauntingly delivered this night. Just as with June's irrevocable sheer vocal power, but bolstered beyond by her adamant confidence contrasting June's uncertainness, Chan powered through a mish-mash staccato delivered set that was chockfull of surprises amidst the usual coverage from her latest, 2003's acclaimed You Are Free, to her beginnings with 1996's What Would The Community Think.
Seizing every opportunity in effortlessly dictating the tempo of such an intimate party, Chan boldly charted a haphazard course that had her faithful either amused or enthralled to her great delight. In her renegade throw down, Chan giddily echoed upon her own blissful rebellion as she playfully rolled her eyes, “This is a show that my label (Matador) hates.” Perhaps so in that there was a joyous reckless, an almost unprofessional juvenile abandon throughout her set that would duly worry any label, yet somehow, someway it failed to diminish her natural brilliance apparent duly admired inside. Clearly bringing a greater meaning to the title of her latest album, Chan's unpredictable and direct manner gave way to an accessibility that few artists today give to their following that righted any possible wrongs this evening.

No matter the tracks played, each inevitably was bridged together with some quirky, yet endearingly rambling personal banter from Chan to all present. Whether it was her emphatic and recurring penchant to give away a partially smoked cigarette to ones sitting upfront or her road stories as well as her long-winded explanations to the songs origins, Chan's ever-restless imaginative goldmine mind found its voice through her lyrics, music or mere commentary. The earnest hopeful reflection of “ Good Woman” to the warm conversational play of “I Don't Blame You” with its improvisational boogie ending added, a happily scattered Chan kept time in an unhurried manner as if she was in rehearsals or the studio, oblivious to those in front yet not throughout. Her quiet spirited acoustic rendition of “(I Can't Get No) Satisfaction” flexed a seriousness often missing. But that couldn't be anything further from the truth: Chan Marshall reaped extreme command and satisfaction, despite a most unorthodox and layered performance that was punctuated with her lip-sync closer over a kid's rap that both befuddled and intrigued. An enigma to the end as usual, Chan clearly relished her role as carrying the torch once vigorously carried by Dylan himself. But a question remains from this night for the future: Will June follow suit next?