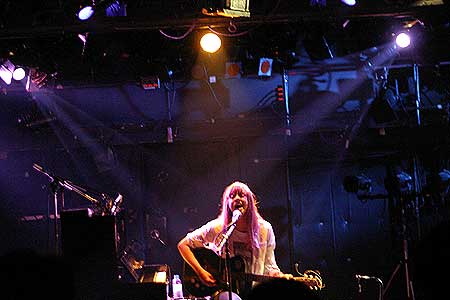 Well known for letting feelings get the better of her when on stage, Chan Marshall (Cat Power) got as close as she could in getting the reverential crowd to share the tension and emotion of performing live. The nervous energy in the air was there, and shared, from the moment she stepped on stage right through to the mildly flamboyant, flippant dance routine which brought the evening to an encore-less close just over an hour later.
Despite signs of relaxing, taking her shoes off, cadging a smoke from the audience and some between song chatter, there was much that belied the emotional knife edge being trod as the show unfolded. A hand sign to move a gentle spotlight from her face as she settled herself on stage let it be known that she wasn't in a mood to give too much away. She did relax, but these comfortable moments took a beating as her attempts to bring the audience along were met, as is so often is the case here, with minimal visible response. Seasoned residents know this is as much to do with the microscopically close attention being paid to what is happening on stage as to any overt attempt to be rude. Ms. Marshall can take solace in a comment made by a young female fan asked for her take on the performance; "godlike" was her single word response. 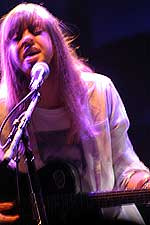