I don't understand: it says that Cherokee is the new digital single and that it is out on since june 18. 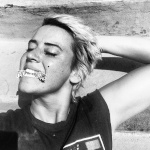 Nicolaoua wrote:I don't understand: it says that Cherokee is the new digital single and that it is out on since june 18.

Yeah, appearently it has been streaming in a couple places since then. But of course we didnt know anything about til the other day. How come, "Cherokee", the appearences, the album details et al., are not listed over at Matador's website. It's like they never know whats going on.

Wait, hold on. Details on the album formats!

Cool!
The way they communicate seems so strange. They ask you to check their blog for further informations when it is already available in their store...

I'm totally in for the deluxe package, but i guess that i'll need the cd as well. And what about the itunes exclusives? Budget? Over 40$ (probably much more in Europe). Oh well...
So, just to sum up, we'll have:

Total: 15 new Cat Power songs and probably one more for the Japanese CD, as usual.

Well, if "Nothing But Time" has its own side and it's 8 minutes, thats a pretty short side. Hmmmm.

SUN is not about a happy world - it's about being at peace with a world that is often unhappy and unfair.

I like that the album is being described as its own world. It reminds me of this quote from Chris Novoselic, when he refered to Kurt Cobain and said something about the best artists create their own world.

The narrative arc of the record is vast and deeply American in its spaciousness; the musical idiom is defiantly modern and global.

That's actually kinda poetic. I think I agree with this on the 2 songs so far, she does sound really confident in her vocals. Like on Ruin the way the lyrics are punctuated and kind of march through the song. Listening to "Cherokee" and I am really liking her drums in the first minute or so. I think there should've been more Eagle scream (just kidding). Actually I love that part. So yeah, both of these songs are more upbeat than her live versions. Those live versions are still awesome. But I like that she is more upbeat. It's a great change. The hallmark of the Jukebox era was to slow down everything. Some live versions of "Blue" are like 9 minutes long (not a bad thing at all though).

Cokelike wrote:
Well, if "Nothing But Time" has its own side and it's 8 minutes, thats a pretty short side. Hmmmm.

Sure but Sad Eyed Lady of the Lowlands was only 4 minutes longer and had its own side.
We'll see.

I love that song. Theres a great story about how the band backing him were only just learning the song. So when you listen to it and they do those build-ups, thats the band thinking the song is over and then pulling back and realizing they need to keep it going. They had no idea how many verses he was going to do.

Sweet! Thanks for posting!

A lot of informations there!
I would never have imagined that she was almost broke!

Nicolaoua wrote:A lot of informations there!
I would never have imagined that she was almost broke!

"And I love having a production assistant to help me with the stage, because I have this cool guy who does really magnificent stage design. I have all these ideas. I want the show be very neanderthal sci-fi-- but I can't tell you the secret recipe yet."

Can't wait to see this!

I'm enjoying these new interviews. One thing I've noticed is, no matter when the interview happened, the interviewer always has to make note of Chan's conversational style. As Pitchfork put it, "Marshall is not the most linear thinker." I think at this point its almost like a requirement that something like that to be put in the introductory paragraph of every interview.

Sun is marked by uncharacteristic electronic beats, synth flourishes, and even some Auto-Tune.

I'm not big on auto-tune, and I'm surprised to hear this. So many of her vocals are close-mic'ed and natural. Hmmmmm.

11-minute, two-chord epic "Nothing But Time", a tribute to David Bowie's "Heroes" that features backing vocals from Iggy Pop.

Okay, so now it's an 11 minute song. Even better. (off-topic but Nico's cover of "Heroes" rocks.)

"My tempo is usually pretty slow because I don't know how to play that well."

Its a testament to her abilities as a singer-songwriter that she has made so much good music when after 20 years she is still saying that she thinks she cant play that well.

"I was writing all these really slow guitar songs, and my friend said, "This is like depressing old Cat Power," which made me feel like I got shot. I didn't work for eight months after that."

"I had no fucking idea what to do, but I knew I was not going to even look at a piano or touch a guitar. So I started out with a weird synthesizer."

Interesting, considering that in some of interviews from 2010 or so, she was saying that she felt guilty that she was just up on stage singing and not playing more guitar. She is as unpredictable as ever.

"We were touring, and I was trying to get them to be tighter live, so when we returned it would get tighter, too. But it didn't work out the way I hoped. On the album, "Ruin" is the only song that you hear the band on."

Crack the whip, Chan! Love it. When was the DDBB ever not tight? She must notice everything on stage. I wonder what she means by it didnt work out the way she hoped? "Ruin" is now the DDBB's swan song?

"I'd been getting a lot of pressure that I needed a producer, but I knew that I didn't because I never used one before. I've only ever used engineers. Telling someone they need a producer is like telling them that they need a nose job-- it activates something in you that makes you feel like a loser."

"I'm getting that instead of just a tour manager, because all my tour managers go crazy."

I want to hear some stories.

"I have all these ideas. I want the show be very neanderthal sci-fi-- but I can't tell you the secret recipe yet."

I agree, Sab. Sounds like this tour could be a really big deal!

What the f*uck, she lived in the same area than me!!!

I bought a copy of Voxpop.
The pictures of Chan are from Mathieu Zazzo and they are gorgeous.

I also looked very quickly at Magicrpm, and there is no need to buy it for the tiny Cat Power article.