This was the 22nd performance of the tour. 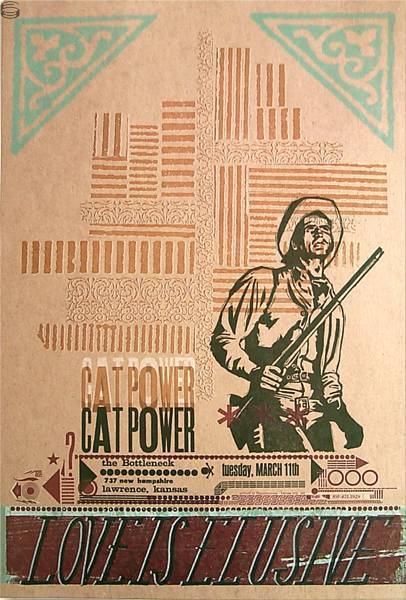 Known for her emotionally fragile shows almost as much as for her music, Cat Power (aka Chan Marshall) lived up to both halves of her persona Tuesday night at The Bottleneck.

Her breathy vocals sounding as wonderful live as recorded, Marshall made it through five whole songs before crying and leaving the stage, following a performance of "Fool" from her latest album, "You Are Free." It was a fitting tune for the singer's first breakdown, as the lines "A direct hit on the senses/You're disconnected/It's not that it's bad/It's not that it's death/It's just that it's on the tip of your tongue/And you're so silent" seem to reflect her stage show perfectly. The large crowd, obviously captivated by Marshall, must have been difficult for such a private person to handle.

After returning to the stage, Marshall scattered covers through the middle of her set, including Bob Dylan's "Knockin' on Heaven's Door" and The White Stripes' "Dead Leaves and the Dirty Ground," which was given a breath of fresh air with more expansive instrumentation. Granting Marshall a reprieve from her more personal songs, the abundance of covers seemed as appropriate as her own "I Don't Blame You," a song about an artist frustrated by the demands of the audience.

After the main set of 17 songs, Marshall returned for another Dylan interpretation, "Paths of Victory." She never finished, though, as her self-professed perfectionism wouldn't allow her to continue because of problems with the vocal monitors.

Despite the abrupt ending and other erratic episodes, the show was a resounding success.

To paraphrase one of Marshall's lyrics, if she could stand to be less difficult, her performances wouldn't be as wonderful and enthralling.