The sixth date of her short seven date European tour.

Disappointing is the first word that goes through your head after attending the step by Madrid of Chan Marshall, also known as Cat Power. Despite playing the night before Easter bridge, Chan managed to fill the sala Clamores. There was much excitement among the public before the author of the best album of 2003 for which subscribes to this review. But everything was in a concert failed in all of its 45 minutes duration.

With some delay, he appeared alone on stage in penumbra, willing to interpret their songs with the help of a guitar and a piano. Even so, as he was developing his songs disenchantment was seizing of attendees. Themes spliced and blurred or, worse still, cut without apparent reason; inability to properly appreciate its evolutions on stage by the non-existent lighting; very long pauses in which he smoked, drank, did absurd noises and was joking with the public making some jokes that no one understood... But at least had the detail of inviting everyone to provide her and shout "fuck you" (sic).

Everything indicated that his head was too far away from where we were present. Thus was reflected in the accelerated version of Good woman, who supposedly already not played since he broke a finger (and perhaps it would have been better as well). However, there were moments that could enjoy his unique voice. On the other hand the themes at the piano, during which a small drum used to mark the rhythm, sounded much better than with the guitar.

Chan left the stage after interrupting a topic suddenly and not already returned more to play. Sad end for a concert to forget. We will continue listening to your discs, infinitely superior to which showed her on stage. Hopefully someday expire their scenic fears and everything inside can leave in each concert. 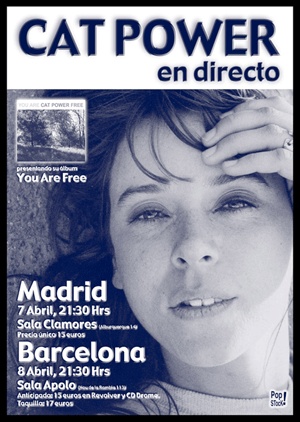