This was the 68th performance of the tour.

"How many Goths does it take to screw in a lightbulb? None, 'cause darkness rules!" Chan Marshall is obviously in a good mood and tells jokes. Given that the show in Frankfurt two days earlier fell to a mean disaster when she broke off the concert after a couple of pieces, this is at least a good sign. For "good spirits Show" also means that each of the fans who hang around outside the club, not only autographs gets, but also equal to the guest list moves - even if one or the other to listen to needs, that he Chan at the American Psycho remember. This is due to the fact that Chan Marshall is constantly engaged in assessing people to describe, explain, analyze, classify, etc. Ultimately, the result means that they can of course also write very good songs - but the other hand, for those concerned But look, at least surprising.

No matter: the quasi Prinzenbar is the back entrance to the large docks, which had been originally selected as the venue for the show - what could have been better also leave. For the first meager advance in recent days moved quite noticeably and so was the odd multi-level tiered venue sold out. Chan was - unlike in Cologne - in time on that day there, but was the support band, Women & Children, the Elbe and was stuck at first, while the audience is already stacked in the Prinzenbar. This led to the fact that the sound check "on the fly" on the ground had to be done, what worked then still pretty neat. As the stage but for the small space much too large, but was far too small for a real band, plus piano, drummer Will had decided to strip Chan of wisely to build only a small fraction of the space-consuming drum kits. This meant that it played a very important role in the following - which meant that it would NOT give this time rock show. What is a good thing, because these are neither Chan nor romp around the strengths of Women & Children. This then played a relatively economical set, where the band's trademark - the changing of instruments - led to some tracks Glen Branca were presented with four standard guitars. That fit very well with the reduced structure of the C & W songs, aimed more at the levels of nesting, as the juxtaposition of verses and choruses. In particular, the arguments put forward by singer Cheryl plays the piano tended there - more so than in Cologne - in the direction taken by Mary Timony also with their penchant for medieval harmonies in alternative clothing. The bottom line is recommended, W & C at this show as a collective good, and presented themselves very much more relaxed and also more intense than in the little fluttering appearance in Cologne.

The same could be said for Chan Marshall. Chan has a new ring she wears on the thumb (and of course at every available opportunity stores, since one can not play, and then forget about them). The ring bears the inscription "An Angel Passing By." So are those moments meant, Chan told us, when two people meet and get along on a magical level, without having to exchange words. The same was true for this concert. The audience waited like sardines packed together Chan's speech, and understood. Apart from the fact that it was so hot on stage, fear that one had to have to suffer alone from the lamps sunburn, there were no significant real or imaginary Obstakel that had to be overcome and you could concentrate on the music . Chan began with "American Flag" - but not in the nerve-sapping, psychotic-electric version, but still in the plaintive bluesy version. This was significant because they show where there are set to music in Cologne, tension and energy needed, there were more positive vibes here. Clear that the then still in Cat Power is not a cheerful sing-along: songs like "Baby Doll", "I Do not Blame You" or "Fool" from the new CD "You Are Free" are just now no time encouraging popular songs. But when Chan has learned over the last few months and on the current tour (which they called the best of her career), then it is to accept the works as such - and try not to let this ineinanderzufließen fragmentary to the unpopular applause to avoid.

On this tour the first time it seemed as if they actually enjoy Chan to appear before the people. Small details suggested: There was a need, for example, a pimple with eyeliner - cover - or felt-tip pen. Previously she had hidden behind the impassible just the hair curtain that today it no longer had the time. Then they sang as the cover of "Satisfaction" to the chorus - she had been left out always remember to have to pay not only the direct connection to the rock-idol Jagger. This year, she bawled seemingly carefree "I can not get no satisfaction" to the audience - along the lines of: Look, I can be a rock star. (Not that they would ever admit!). She dedicated the song then Peaches, who had dropped in on the show to learn about Chan once. With violinist, Margaret (which sometimes takes the bass) Chan has found a very good singing partner, with whom they are - in terms of their award-ring - adds angelic standard blind. And so then ran track with vocal harmonies - like "Maybe Not" and "Good Woman" - one of the highlights of the show.

After the official part of the set list was then processed, there were three cover versions: "Dead Leaves And The Dirty Ground" by The White Stripes - here but not as a rock number, but rather as a blues, "Knocking on Heaven's Door" - at the way the chorus by amending it to "Knock, knock, knock - who's there" (Which of course gives the song a different meaning) and Otis Redding's "Try Me" in which she went down to the micro into the auditorium, there lay on the ground and celebrated the song as a folk-soul anthem of the class. The fact that Chan was quite hoarse, had a case of very beneficial. Unlike in Cologne it was then Chan then also be good, which is now on the face of increased humidity in the sauna-level club was perhaps just as well. Even though they will have forgotten even the next week, perhaps once again: For the present, this was certainly a night to remember, and certainly one of the best shows that Chan has played so far in this country. 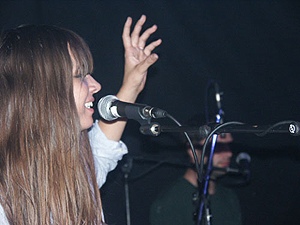